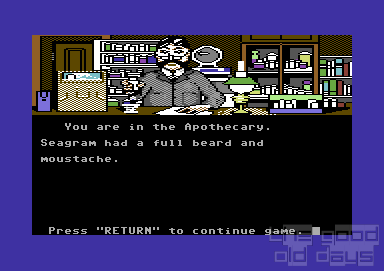 Some board games can be converted into computer games perfectly, because their rules are simple and logically structured enough. 221B Baker Street is such a case.

30 cases in classic style of Doyle's shorter Holmes stories are waiting to be solved by the player(s). As it was common back in the 80s, the nicely written introductions to these aren't presented 'in-game', but they can all be found in the accompanying casebook.

This is done by visiting key locations and questioning people there. Of course, not everybody has to say something about everything. However, if the crime happened in the theatre for example, this might be a good place to start the investigation.

Clues are sometimes purely conventional (like something a witness would actually be able to tell you), but sometimes, you get little language puzzles which you have to decypher.

If you think you've learned enough, you make your way back to Baker Street. This is where the only notable change compared to the board game comes in: of course, you can't present the solution 'freestyle' like in 'real life', but you have to answer specified questions instead. That makes guessing possible and everything a little easier. However, that's as far as changes go.

The game has a few basic problems, of course. First of all, cases you already know aren't replayable at all, so as impressive as the number of cases might sound at first, they don't last that long. Also, a computer specific problem is the relatively slow gameplay. Last, but not least, the single player fun is kind of limited, because even though there is a final rating depending on how many clues you needed to solve a case, it is hardly challenging without competition.