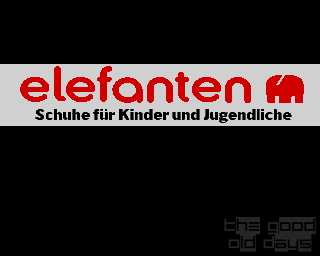 Oh, sweet childhood! Even for boys, there were ways of making shoe shopping (basically one of the most hated activities ever) into a true adventure. In one store chain, you got free comic books of Lurchi and the competition had you go on a safari (well, at least you could get a plush elephant)! It's the latter company (which has by now disappeared from the market) which is also responsible for this game: another attempt at acquiring customers in a playful way.

Then again, shoes don't even appear in the game above their implicit everyday use. Rather, it is a product meant to foster the company image: joining with the WWF, the attempt was to teach the young target audience a little environmental awareness. More specifically about elephants (the animals, before their parts are processed into articles for human use).

The player heads an African wildlife park. You have to acquire land, watch the elephant population, catch poachers and plan tourist tours. All that is done comfortably from your office desk. And from time to time, there are a couple of quiz questions about elephants.

On the one hand, this is somewhat informative on a very basic level, but the real issues are mostly ignored (apart from the poachers). For example, there are virtually no problems to buy more and more land for token sums. Also, there are more than enough solvent and willing, peaceful tourists as well as generous sponsors with fat purses. Purest phreatic water in unlimited amounts can be siphoned in the simplest of ways. Just as if it were the central goal of all the well-meaning governments of the world to provide appropriate living space for elephants. All things combined, Elefanten almost plays itself.

At times, the shoe brand's logo interrupts the game. Apart from that, we're spared any advertisement (not counting the moralistic political propaganda). That doesn't make the game immaculately clean. Rather, you'd have to ask what all these connotations have to do with the advertised product. Did the shoe company actually, i.e. on practical, not just moral terms, support the establishment of such parks? Without wanting to take the effort to research: unlikely! It's much more likely that they just wanted the positive image of environmental organisations to rub off on themselves. Though maybe one of our readers knows more? 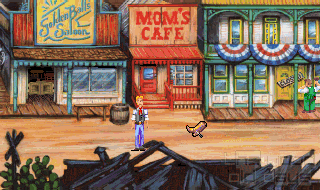