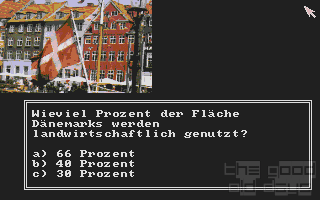 In 1991, the EU wasn't nearly as prominent as it is now. In fact, it didn't even exist back then, because the treaties of Maastricht would only be signed a year later. However, there was the 'European Community' which was pretty much a predecessor of the EU. And it was obvious that the political and economic integration would continue, so there was a 'need' for political propaganda to soften the nationalist feelings of the population. Which part of the population is most easily influenced? Right, the children. Enter Auf dem Weg nach Europa.

It is planned as a multiplayer game (but can also be played alone): The players travel around the member countries of the EC (those which were members then - less than today, of course) to collect 'souvenirs' - one from each. This is done by answering trivia questions about each country. Depending on the number of correct answers, you get a better or worse souvenir (= more or less points). After collecting a souvenir from each country, you can go to Brussels for the final questions about the EC itself. The player with most points (usually the one who ends the game by going to Brussels) wins.

Between those rounds, the players have to play quick arcade scenes (to win money to finance their travels). These consist of very simple and very well-known concepts: pick stuff up in a maze, collect money falling from the sky play a one-armed bandit. The highlight of those is a two player version of Pong (labelled Tennis) which pops up when two players meet in the same country.

The central point of the game are still the questions, though. These are surprisingly varied. Not in their sheer number, but concerning their topics. They're not only about the EC's bureaucracy, but about history, demographics and well-known personalities of the specific countries. Of course, you'll know them all after a few rounds.

Overall, Auf dem Weg nach Europa is definitely one of the better educational games. Not groundbreaking or sensational, but at least not as obstrusive as some of its competitors, but rather trying to get some general knowledge about things everybody should know over.