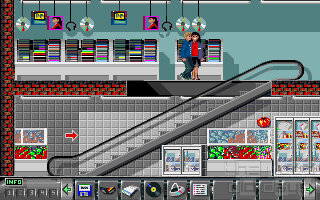 A local radio station is holding a competition: answer five questions about (male) rockstar Alex X. Pose (for the younger readers: the singer of a then popular band called Guns'n'Roses was called Axl Rose) to win a romantic candlelightdinner with him. Our (male) hero is keen to be the chosen one. Yes… you'd better ignore the homoerotic elements of this story. Anyway, let's just say our protagonist is a huge fan, ok?

The questions all refer more or less directly to the singer's new album and his current live tour. Off to the local music store… damn the racks are a mess! Asking the clerk doesn't help much, either – she's just annoyed and unhelpful. Good thing there are alternative sources to buy new CDs… 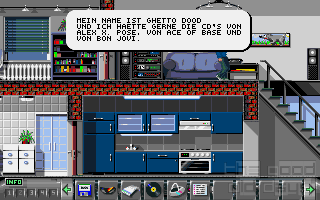 This is where the advertisement comes in: Backstage is promoting the Liveclub. That's one of these stores in which you had to become a member before you could buy things. Members could then tell themselves they got something cheaper than elsewhere – at the price of being forced to regularly buy something. And if you don't buy something 'voluntarily', you'll get something nobody else wanted automatically sent to you. Yes, it all sounds particularly silly and anachronistic these days in the times of music being exclusively distributed digitally, downloaded or streamed, but that's how it was in those days.

This club, of course, directly and indirectly helps you to solve all the questions. Sometimes it's products from their vast collection, sometimes you utilize the tons of gifts you allegedly get from them. What have we learned today? Liveclub = great, all others = bad. 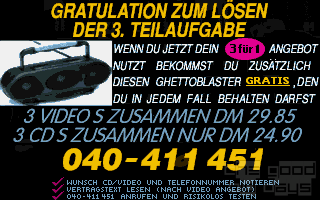 Backstage is made in the same style as Snackzone: you'll immediately feel at home with the joystick controls and the graphics. It is, however, a purer Adventure. You can't die, there is no action at all. Now, you may think that some of those arcadey scenes of the other, better known game seemed at bit forced. Which may be true, but nevertheless, they made for a varied overall challenge.

In their absence, the simplistic puzzle structure, which boils down to basic fetch and exchange quests (the guy at the pool wants object X in exchange for Y, which in turn you need to receive Z), becomes all the more apparent. Real characters are nowhere to be found in this world, they only exist to fulfil gameplay-related functions (such as providing some object or gatekeeping an area). Dialogue is consequently borderline brain-dead.

Since overall length remains limited, in line with typical promotional game standards, it still doesn't run out of steam while it lasts. Just that it never picked up much of it in the first place. It's an entertaining little game, but rather forgettable overall. 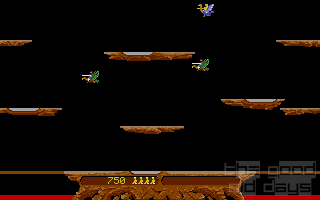