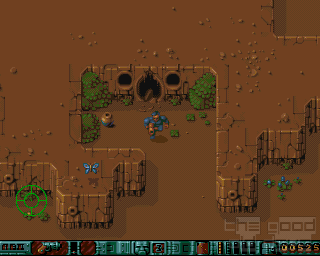 The home computer era had a shitload of free games which, as spyware had basically not been invented yet, came with no strings attached. Most of it was rather unspectacular and not particularly worth playing. Case in point: the first Alien Bash, an ok, but unremarkable shooter set on the decks of an alien spaceship. Instead of Alien Breed, Alien Bash II now takes its cues from Chaos Engine.

At least visually, that is. The graphical style is very clearly reminiscient of the genre-defining instant Bitmap Brothers classic. So is the setting, with its suddenly appearing monster lairs, disappearing walls and at least some (seemingly) pneumatic machinery hissing and sizzling. Not that it leads to much of a plot – evil aliens are invading the planet, the hero facing them alone. As the authors put it: 'Yeah ok so its a routine plot'. Not that Chaos Engine was much more imaginative there.

What's probably of more interest is the gameplay. In one area, there is actually quite an obvious improvement: The game lets its player choose between three different modes of control (selectable using the function keys), the default one allowing to turn on the spot while shooting. Also, the special weapons which can be collected or bought between the levels are quite useful, especially in the boss confrontations (which didn't even exist in CE).

Though those boss fights are probably also the best example to start illustrate why when push comes to shove, professionally developed games often have it easy beating free ones simply because of the amount of time which can go into them. Every single 'boss' is basically the same one – this giant machine throwing fireballs. There are also eight levels, which is certainly not a bad number, but they just don't have the same number of secrets. And they all share the same graphical tileset, just superimposed by two or three different weather effects. The list goes on: the samey enemies, the lack of a two-player mode…

Another thing should also not be underestimated: CE was one of the first 'multimedia experience' games. The excellent soundtrack and the well-placed, professionally intoned voice snippets did a lot to make the game what it was. Alien Bash II has got a nice title tune and after that, just stock sound effects. Collecting power-ups, there is a pretty pathetic voiceover announcing it.

Don't get me wrong: As a freeware game, Alien Bash II is quite an accomplishment for what it is. It's playable and fun, surpassing even a good number of the commercial competition. The crux of the matter is just that it picked a role model which it just can't live up to. Aiming high is not something anyone can blame the makers for, though, is it? 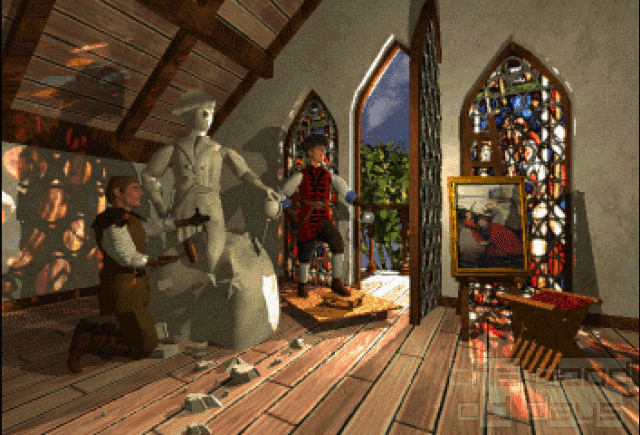