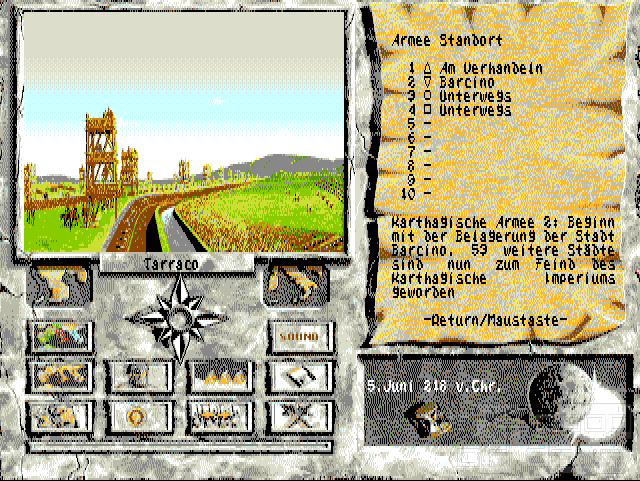 A German strategy game with decent graphics and intuitive controls? What a novel idea! Ok, there are exceptions - think of Battle Isle and The Settlers. Hannibal can't quite reach that high level, but it comes close enough…

The 2nd Punic War is of course the topic of this game. By scrapping all thinkable options, the player is thrown directly into the main part: as commander of the Carthagian army, you have to lead your forces to final victory by conquering Rome.

This is (of course) done by shoving little army symbols back and forth on a map of the mediterranian area. The Roman empire consisted of Italy at that time, and they had already set foot on Sicily. The Carthagian mainland was located in northern Africa, and their colonial activities were focussed on Spain (too focussed, because that was what started the war…).

Because just moving armies around would have been a little too little (eh?), Hannibal also offers a simple economic part. Budgets can be made, taxes can be collected. In cities your armies visit, you can spend the army's money on new mercenaries, horses, elephants, boats and rations.

Cities are split into seven categories: Carthagian, Carthagian colonies, friends of Carthago, neutrals, friends of Rome, Roman colonies and Roman mainland. All which aren't already part of your empire can be 'incorporated' by siege - if the fortifications aren't too strong. Diplomacy is available as a peaceful alternative to win friends who then voluntarily provide you with fresh soldiers.

Of course, every city is also part of a country. Attacking one, the rest of the respective country will switch their sympathies to the enemy's side. Attacking without a plan will therefore only help the foe, and not you.

Epic battles between armies sometimes happen, too. Here, you can choose between several tactical formations which are all explained in the manual, but the effect of this choice is questionable (read: there is no noticable effect). In any case, the battles are running completely automated. The only option to influence the result is the Pythonic command 'Run Away'.

Hannibal starts out very motivating, but it suffers from its limitations. The endless scouting of markets for mercenaries quickly becomes routine. The economy part is mostly facade, because you might as well not touch it at all and you'll still be equipped with more money than you'll ever be able to spend. The limitation of 10 armies at the same time reduces your strategic freedom. And last but not least: There is indeed only this one scenario! You can neither jump into the game on different historical dates, nor can you take over Rome's perspective. You're even restricted to always play against the relatively weak AI. Like so often, diversity is missing, and after one successful game, there is no reason left to play it anymore.

Until then, strategy fans are well entertained at least, and that's something especially Germans aren't exactly used to, so we can be more than satisfied…

P.S. The announced second part of the game (concentrating on politics) never appeared. 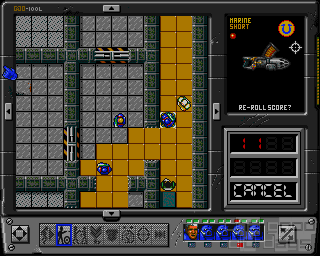