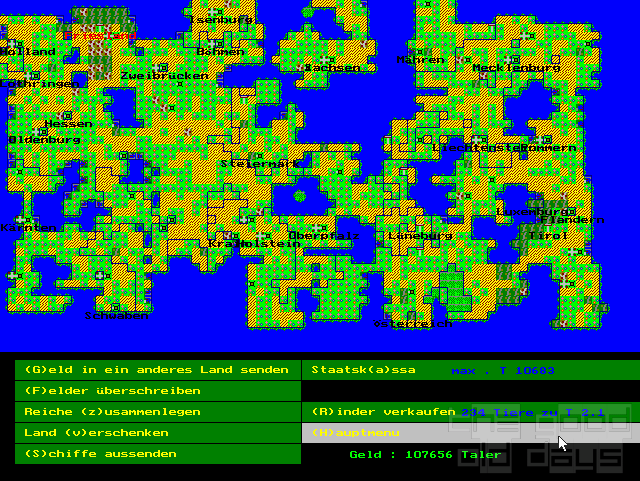 Sometimes, one small idea is enough to make a good game. Kaiser is a great C64 classic many people know. There are also lots of remakes. Only few of those tried to expand the gameplay, though.

PCKaiser++ adds mainly one thing to the concept of expanding your medieval kingdom by means of war and trade: a map. Building is not done completely theoretically, but you can see exactly where you can place fields, cities and castles.

That way, not only the quantity of your resources gets important, but also the strategic placement. By means of 'offensive' building, you can for example cut off other realms from access to the sea, or even contain them to a small size with no chance of expanding anymore at all.

It also means that wars are fought directly on this map, of course. And what comes after the war is what makes PCKaiser++ good: the winner gets a certain amount of 'points' which he can use to take over part of the defeated enemy's realm. The number of points is calculated based on what kind of spaces your armies managed to occupy. A castle is worth a lot, cities are fine, too, but common fields won't get you much. Extra points are distributed for capturing the enemy king. This system ensures that other realms can rarely be defeated completely immediately, but the winner still gets what he deserves.

Another nice addition is the ability to have 'political marriages' between members of your family and other powerful clans. This way, you can hope to gain power over other realms completely peacefully - or be taken over in the unfortunate event of your own death.

One final point should be mentioned: Big realms get hard to maintain, because the population is quite often revolting then. This has a good and a bad side: powerful players are somewhat slowed down in their expansion giving others the opportunity to catch up again, but it also unnecessarily drags the game along at snail pace in the very end when the outcome is already inevitable, because the supposed winner has to take huge breaks in his conquering while being virtually invincible when attacked.

PCKaiser++ is Shareware. You can still buy the registered version directly from the author (see related links). The shareware version (our download) is limited to 20 turns. That's not much, just a demo to get a feeling of what the full version is like. Still - try it.