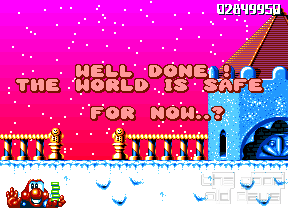 Compared to the first part, James Pond 2 may appear to be a step backwards. In many ways, it's a much more conventional game. Where the predecessor set itself apart from the usual Jump 'n' Run genre by having a fish as a protagonist, the challenge to the player was indeed a little bit different. This game has James put on a special armour which enables him to get out of the water so that he's now been turned into yet another common genre character. 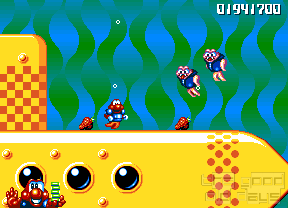 Just that there is always the question looming whether there might be reasons beyond laziness and lack of imagination which made the genre standardise on land creatures jumping and running. Far from any claim to know the general answer, the first James Pond game, while certainly charming, was not particularly exciting. It played rather slow and the levels were samey. Two issues which this sequel addresses.

So the protagonist now runs, even goes into super fast Sonic style mode given the right slope. He can jump pretty far, even more so aided by occasionally found trampolins. As a unique ability, his armour enables him to mechanically stretch (in theory) to infinity in order to grab and hold on to ceilings. Enemies are killed in the genre standard way of jumping on their heads and all the levels are chock-full of little icons increasing score or providing powerups such as extra energy, extra lives or (time-limited) invulnerability.

Where the game really shines is the large number and wide variety of levels. Taking place in Santa Clause's toy factory, levels can be selected by entering doors in what is basically a framing scene presented in the style of the rest of the game. Per floor, not all levels need to be finished in order to advance. Behind some doors, boss fights await the player. And behind all other doors… well, it's always hard to say what will happen, because the sheer amount of different backdrops and graphical sets is simply amazing! 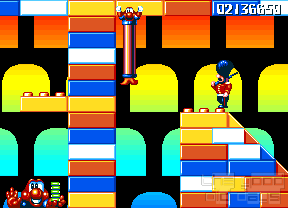 It's not just the graphics, though. Many levels even play quite differently, be it through primarily horizontal versus vertical movement, differently behaving enemies, automatically moving levels (e.g. on top of a train) or just because different abilities than in the last one are tested. Quite often, there are small secrets to discover as well, or even completely different paths through the level. At times opened by finding and using one of the special vehicles (planes, cars, wings or flying bathtubs).

Imaginative visual designs (provided you don't mind lollipop colours and shapes which are obviously an integral part of the overall feeling), a catchy soundtrack and a moderate difficulty level complete the overall excellent picture. The second incarnation of James Pond belongs up there into the hall of fame of the very best – the cream of the crop! Pity it never reached this level of popularity. 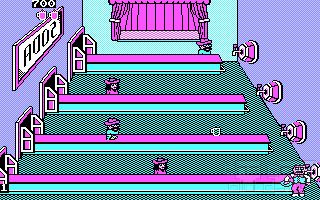