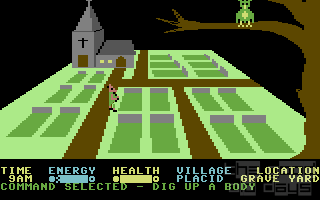 I must admit I'm a sucker for classic horror movies and novels. I'm also one of these people who cheer for the bad guys and abhore the wimpy do-gooders. For all those with similarly sick minds, the 80s produced the computer game of our dreams: Mad Doctor.

The sinister Dr Blockenspiel lives in a stylish castle looming above the village of Strudelburg. He's carrying on the experiments of his uncle Victor (subtle coincidence...) which aimed at building new bodies from dead tissue and reanimating them.

The notes of the old man make two things clear from the start: You can't use too many parts of the same body at once and the fresher the corpse, the more suited it is for your purposes. That means that nightly digging sessions on the graveyard might be good for first experiments, but to build the ultimate artificial human, you have to take care of getting superior raw material.

That's of course only possible by becoming a little more active in disrupting the natural circle of life. The streets of the village are full of potential victims, but murdering someone out in the open while being surrounded by a primitive mob (and probably even policemen) might not be the most popular thing to do.

Sneaking into people's houses (preferably in the poorer district, nobody cares about these inhabitants) at night and snatching their bodies is a much safer way to have material to dissect.

Mad Doctor certainly is one of the most original adventure games ever made. The setting and the characters have been chosen perfectly, and at least the three-dimensional background graphics get the gloomy atmosphere across well.

On the downside, the joystick controls are kind of unresponsive. That can even become fatal if a few upset villagers are on your trail, but usually, it's just a question of patience to cope with it. 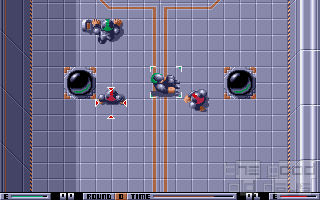