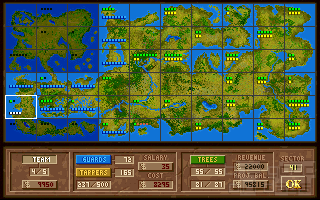 Despot Lucas Santino has taken control over the tropical island of Metavira. Hire a team of mercenaries and get there by helicopter in order to reestablish the rightful circumstances.

At the beginning you have to recruit a powerful squad with limited financial means. For this purpose, there are the services of the “AIM” agency that offers a quite broad variety of mercenaries with different abilities. The mercs' skills in various fields like marksmanship, agility and explosives are indicated by values between 0 and 100. There are cheap wimps and expensive, highly qualified experts.

The island of Metavira is divided into 60 sectors. All but one are seized by Santino's troops at the beginnning. From here you try to expand your territory step by step and get more sectors under your control. As soon as there are enemies nearby your merc squad, the game switches to a turn mode. Each merc has a number of points per turn that can be used for actions like walking or shooting. Once the player has ended his turn, the enemy proceeds the same way with his men.

After a successful battle, the turn mode ends and you can move freely to search the sector for useful objects. The treatment of the inventory is a very important aspect of the game. Besides weapons and ammo, there are items like shielded vests, grenades, and medical kits you can equip your mercs with. Moreover, you have to pay attention to the equipment's condition and repair it if necessary to avoid that your rifle jams right in the middle of a combat.

As the mercs demand a daily salary, you have to watch out for financial resources on the island as soon as possible. Fortunately, an extremely rare kind of plant grows there, and its sap can be processed to a medicine. Now the economical element of the game becomes important. The places where the precious trees grow are shown on the island map, and you can plan your attacks accordingly. However, to make money from it, a factory has to be conquered and tree tappers have to be hired to harvest the plants. Additionally, to secure the front of your territory, a militia is required. It is important to keep an eye on the production capacities and on the workers' salary.

Thus, the main elements of Jagged Alliance can be described as action-driven “tactics” on the one hand and “economy” on the other hand. Quite clearly, there is a focus on the battles that account for the largest part of the game, though. Being successful in combat is the key to financial prosperity. The economic part of the game is not very complex and should not be a huge problem anyway.

Yet, the battles do not require a tactical genius either. You rarely get into a really hopeless situation because the enemies lack of distinct strategic skills. Mostly, there is a tree or a wall to hide behind and open fire yourself thereupon. Unfortunately, some sectors are designed slightly monotonous so that the strategic situations repeat from time to time. Of course the difficulty of the combats depends on the mercs' abilities and some luck as well. Altogether, the combats are alright once you get used to them.

The same applies to the game's controls overall. Some exercise is required before you find your way through the different menus and screens – not very intuitive. Additionally, the complete inventory and the island map can only be accessed and edited at the beginning of a day. If something is forgotten, you may restart the day.

All things considered, that does not alter the positive overall impression. Such a mixture of different genres is outstanding and a rarity. It is fun to compose a team, equip it with new items and finally go to work. Theoretically, the large choice of mercs is good for replaying the game, but in the end, it mostly adds up to a similar team, the more so as the mercs' skills only emerge very slowly during the assignment.

After getting used to it, Jagged Alliance is, in a positive sense, unusual and entertaining game that is suitable for strategic amateurs as well. By the way, many of the disadvantages mentioned here have been improved in part 2, which is a recommendable game, too.

Mr Creosote:
Excellent game. Even though the interface could be better, it's not as bland as for example Sabre Team. Especially the mixture between global strategy (harvesting, managing processing plants) and low-level tactics (conquering sectors) does it for me - you're not just 'thrown' into a mission, then another one and so on.
[Reply] 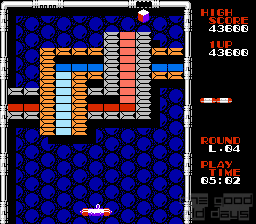