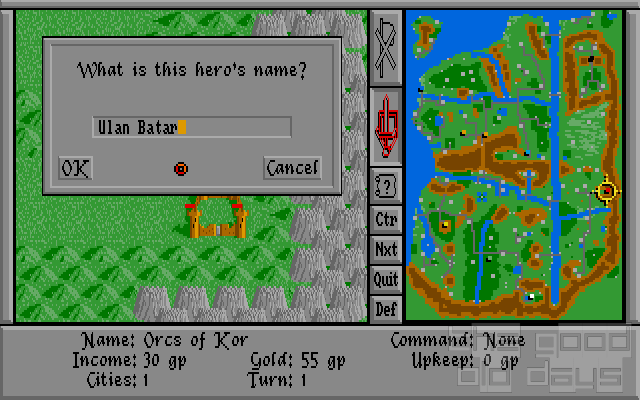 Warlords is a very basic game. Some parts of Empire mixed with a little bit of Risk and finished with a fantasy touch. Up to eight different fractions are struggling over supremacy in Illuria. Illuria is a relatively small country with 80 cities which is completely flat and apparantely has some kind of impenetrable borders - this is where the map just ends.

The races living in this land fulfill typical fantasy stereotypes: brutish Giants, Elves, Dwarves, noble Knights, fiendish Orcs and also the ultimate evil Overlord called Bane. Each fraction starts with one city where at least one race specific unit can be built. From here, expansion starts - or is supposed to start.

As mentioned, each fraction starts with another (then) exclusive top unit production ability. This isn't ability isn't bound to the races themselves, though. It's rather inherent of the respective city, so if another player conquers it, he/she will get this advantage.

Production is scattered across the map relatively logically. You'll find dwarf and giant units mostly in the mountains, cavalry on plains, elves in the woods and so on. Standard units like heavy and light infantry can be built basically anywhere. These production abilities of the cities can't be changed throughout the game. That makes it very important to conquer/hold key cities.

Another pretty unique element of Warlords is the heroes. Every player starts out with one. These strong units can't only fight other armies, but they can also search ruins and temples. In those, they usually meet some monster which they have to fight. Being successful, they're rewarded with either large amounts of gold, magical items to enhance their own abilities or so-called allies. Allies are particularly powerful units like for example dragons which can't be built anywhere on the map. Yet another important strategical factor...

One of the biggest advantages of Warlords is probably also its biggest problem, though: the map. The map of Illuria where the whole game takes place is great! It's very well balanced, yet still structured into very different parts which all require different strategies. Hours, days and weeks must have been spent to fine-tune this map - and it shows. And now the downpoint: it's the only map. There aren't any other countries to conquer, nor is there an editor or even a random map generator. It's always Illuria, and even the greatest map ever can't hold the player's interest forever, in spite of its eight different starting positions.

There are a few other 'shortcomings' of the game, but those have to be blamed on the genre, actually. Warlords is just a wargame, and nothing more. There is no big economic part (just keeping an eye on the upkeep of your army), there is no proper diplomacy and so on and so on. You're just leading your armies into battle. That's really fun for fans and even newcomers to the genre (thanks to the easy controls), but it doesn't go very deep. 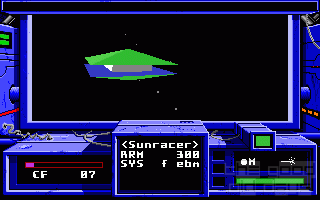