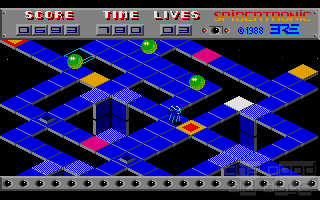 Some games are so weird that you can't help wondering what kind of drugs the designers have been taking when they came up with this. Spidertronic is such a game.

You control some kind of futuristic 'bio-mechanical' spider which - for whatever reason - is walking over isometric platforms somewhere in outer space (?). Some of the squares have a different colour than the usual blue. These have to be picked up and can be used to repair (?) the way to the next level. Only one coloured square can be carried at the same time, and the order of the colours is important.

To make things a little more exciting, there are deadly enemies hopping around: a species of rubber balls. Direct contact with them makes you lose one of your precious lives. Luckily, you have some sort of typical spider-defense: you can weave little nets which cover one square, making it a deadly trap to the balls.

So far, so good. Unfortunately, Spidertronic's execution leaves a lot to be desired. The worst flaw is probably the control scheme. The platforms are presented in isometric pseudo-3D-view, so the directions you can move to are all diagonal. Instead of programming the controls accordingly, you have to move your Joystick left to go to the upper-left corner for example. Extremely irritating.

Another downside is the abundancy of unfair scenes. You regularly have to go up and down via long 'elevators'. There's no way to turn around on those, so if an enemy is suddenly coming the opposite way, you can do nothing but watch getting killed.

A very positive surprise, on the other hand, is the existence of a level editor. Using it, you can create your own levels via a very comfortable point & click interface. Such a feature can only very rarely be found in games from that time.

On the whole, Spidertronic is a decent puzzle game which can be motivating, but also frustrating. 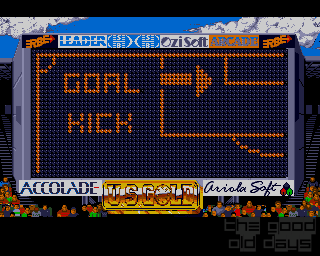