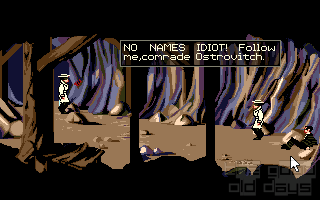 During tests, an American Stealth Bomber does its job all too well and it disappears. Secret agent John Glames is sent to a fictional country in South America to find it. If you think 'Thunderball' now, you hit the nail on the head - Operation Stealth is a try to get the typical James-Bond-feeling into a computer game (in fact, it was even released as James Bond - The Stealth Affair overseas).

The point & click gameplay works via a semi-transparant menu which can be opened by clicking the right mouse button anywhere on the screen. The usual commands are available. The difference between the actions triggered by left and right mouse button can be confusing at times: To use an item on the screen, you have to left-click on the verb, but to use something from your inventory, you have to right-click on it.

Puzzles are mostly logical, but uttely unimaginative. They often rely on pixel searching to make the 'use key with locked door' - style routine last longer.

If you do something wrong, the game is completely unforgiving. For example, on the very first screen, an airport official asks you for your passport. Show it to him, and the game is over. No hint about this being not so wise before.

There are way more ways to die: the Adventure flow is constantly interrupted by action scenes. Granted, the action is an integral part of Bond movies. As long as the action is good, no problem. The action in Operation Stealth isn't. Bad controls and restrictive time limits result in tedious frustration. Worst of all: The longer the game lasts, the less Adventure and the more action you get.

The shortcomings in the gameplay can't be balanced out by anything found in this game. Graphically, it's strangely incoherent. Some sceneries look very good, but on the other hand, it's impossible to tell the protagonist John and his nemesis Otto apart as they look exactly alike. The storytelling which relies more on quick cheap jokes than building up anything is quite weak, too. There's just nothing to save it.

There's only one possible conclusion: Operation Stealth is a nice try, but a bad game. Not a complete disaster, but still below average.

DaveP:
Awwwww,... I am deeply hurt by your review,.. I really enjoyed this gameand found it hard to not continue and move on to see what was gonna happen next. But that was a long time ago,... I doubt I would still enjoy it that much... but,... it might be worth to give it another go 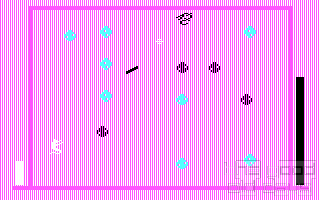