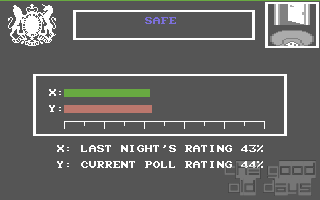 Yes Prime Minister is, as the name suggests, a computer game based on BBC2's TV show of the same name which started as Yes Minister in 1980 got renamed when the protagonist got promoted.

The player's alter ego, James (Jim) Hacker has just been elected Prime Minister of Great Britain. He's sitting in his office, waiting for the action to begin. Little does he know that even the Prime Minister is hardly more than playball of the bureaucrats.

Action is a relative term here since the new PM spends most of his time in meeting with Bernard Woolley, his Principal Private Secretary and Sir Humphrey Appleby, the Cabinet Secretary. No, the two don't type. Usually, there are a one or two scheduled meetings a day, and additionally, urgent topics are discussed on the phone or via intercom.

All these meetings follow a simple formula: Someone describes the problem at hand to you, and you have to pick a decision from one of the offered alternatives. Then, the discussion continues, more questions arise which you have to decide about, more discussion follows and so on.

Your decisions influence your overall popularity. Polls are held every day, and losing too much support will make you fail to survive even a week.

The game's texts are all written with an ironic edge, matching the series' general tone. The political issues adressed are, again as in the series, rarely topical, giving it a timeless quality. Sometimes, you even get disguised quiz questions which require knowledge instead of decisions.

The completely reactive gameplay (common in this small subgenre) can get a little unsatisfying after some time, of course. If a topic isn't addressed by someone else, you won't get to decide. This makes Yes Prime Minister anything but a real political simulation, but it's still good light-hearted entertainment. 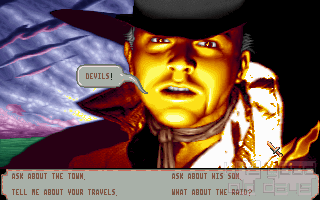