Rex Nebular and the Cosmic Gender-Bender
for PC (DOS) 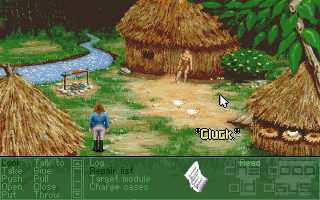 Rex Nebular, cosmic adventurer, delivers the valuable vase he was sent to retrieve to his employer Col. Stone. Walking into the office, he demands his payment. Gruffly, Stone asks how the mission has gone. Rex begins to tell his story...

After this Monkey Island 2 - twist, we see Rex' space vessel being shot down by a huge ship 'manned' exclusively by women, and crashing in the ocean of the nearest planet. Stranded - as it turns out on a planet which has had a war of the genders a long time ago. The women won, and men have been extinguished.

The planet's population uses two means of reproduction. First are captured men like Rex. The idea of being used as 'breeding stock' appeals to Rex - until the doctor tells him it might get a bit uncomfortable between the 400th and 600th time a day. So he has to escape, and find the vase in the process. Maybe he'll even have to utilize the power of the 'Gender-Bender' to stay unnoticed in this world of women. This machine is used to change women into men and vice versa, which gets useful for reproduction in a purely female community, too.

Rex Nebular and the Cosmic Gender-Bender is the first release in a short-lived line of Adventure games published by Microprose. And boy, is it a debut! Good graphics, music and sound (the intro even has full speech). Excellent controls with a basic set of general verbs plus specific ones fitting the potential uses of an item. Death scenes which will immediately set you back to the situation before you made the fatal mistake.

And last but not least, humor. Unlike certain competitors with a similar 'adult' theme, Rex Nebular is actually funny. Funny in a stupid way, but funny. Where Larry tries to be raunchy, but is in fact just one huge inhibition, Rex goes all the way.

This kind of humor can even be turned off in 'nice' mode if desired. There are also three difficulty levels which add/remove a few puzzles from the game. Since pretty much all of them are logical, this shouldn't really be necessary, though.

After about half of the game, the quality drops a little. The joke-rate decreases, and there's a lot of pointless driving through a dead city. Whether it was the close-to-the-deadline-rush or just lack of imagination, because all the ideas had already been used? No idea. In any case, to get into the top rating class, a game has to stay consistent all the way. That's the only little thing in which Rex Nebular fails.

DrJones:
Fun, but much, much worse than "The Return of the Phantom", which came later. Rex Nebular is the "Eternam" of Microprose's adventure games. Once you have seen what they were capable of in Dragonsphere and the phantom, you don't turn your head back to games like this.
[Reply] 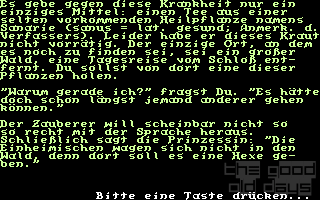