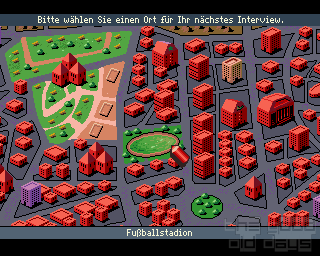 We're slowly turning into a propaganda site for the government - this is already the third game financed by them we're presenting! No idea what we're trying to compensate with that, wishful thinking at our school days maybe (since they're all 'educational' games) or bad conscience because of the terrorist acts.... er... better stop talking about that now.

Der Rasende Reporter puts you into the position of a team of 'youth journalists' who are doing slave labour for some daily newspaper. Each morning, you're given three headlines of what is happening by your 'boss'. Then you have to go out to the city and find as many people who could have something to say about these 'hot subjects' and interview them. Depending on the subject, it could be a judge, a policeman, a politician, a student, a banker or one of the many others. You write their answers down, make a photo and when you've exhausted the interview possibilities for today, you rush back to the office.

That's it for your job. The big boss would never let some lowlifes like you touch the layout or anything. To save costs, he's running a computer progam to do that - apparantely a program which is not too creative, because it only puts down the statements you've received from the various people, one after the other. The next day goes exactly like the last one - and all the others.

According to the makers, this game is meant to "get young people interested in politics the playful way". It would have certainly worked better than the usual lessons at school, granted. It's easy enough to play, the subject is interesting enough, too.
Why the relatively bad rating then? Because there is just nothing to do! The interactivity is limited to clicking on the same things again and again without making any significant decisions. You just go to the right places (which are completely obvious from the topic) and then ask predefined questions and write them all down with another click (why shouldn't you?). As soon as you get fed up reading the stereotype answers to your stereotype questions, the motivation goes down the drain.

The usual curse of 'promotial' games has struck again. These games mostly have good graphics, the topics are sometimes interesting, too. Sure, they're mostly quite short, but that's forgivable for a free game - as long as the little time you can spend with it is filled with some challenge and fun. With a little more effort, this could have become the little brother of Mad News, but the way it has turned out, it is nothing more than a failed try.