Zak McKracken and the Alien Mindbenders
for C64 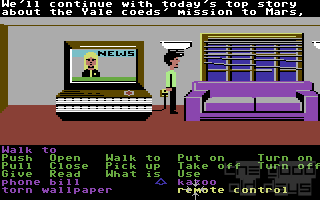 Protagonist Zak McKracken is working for a tabloid in San Francisco. He hates his job, and he'd much rather write a novel instead. But he has to earn his money, and so his fat boss gives him another assignment: to write a story about a two-headed squirrel. Urk!

Who would have thought that the reality right outside of Zak's door outdoes every pdeudo-sensational half-truth? Aliens from Mars have landed on earth and they've taken over the phone company. Instead of normal conversations, only strange noises are now being sent through the lines. These noises cause immediate loss of intelligence to the human brain. What an evil plan to take over the world!

The only one who can prevent the enslavement of the whole human race is Zak. He's supported by three female college students who (just like him) had had strange dreams lately. They got the 'order' to build a spaceship and so two of them went to Mars to 'wait for further instructions'. Zak and Annie, who has stayed at home, too, travel to the remotest places on earth in the meantime, to solve all the related and interwoven mysteries.

Zak McKracken is, after Maniac Mansion, the second Adventure game which uses the SCUMM system (it's also the last one which relies on the first version of this scripting language). Nothing more needs to be said about this, it's a topic which has been covered numerous times in other reviews. To make it short: the controls are working quite comfortably, but compared to the total freedom of text Adventures, it's a little limiting, of course.

Mainly, Zak McKracken relies on its crazy humor (just like MM). It all starts with the goldfish which is - of all things - called 'Sushi', and when it comes to the 'subtle' costumes the Martians wear (wet suit, hat and noseglasses), it's hard to hold back at least a snicker. There are also the usual in-jokes. For example, you can find a can of gas on Mars, but no chainsaw...

In spite of the great beginning, there are two things which drag the game down gameplay-wise. First of all, a clear plotline to follow is lacking - especially for inexperienced players who'll feel lost about what to do quickly. It wouldn't be that bad if it weren't possible to travel around the globe. Far too many locations can be reached in no time, and even worse, it even costs money. In other words: go somewhere, check if you can do anything useful there, and load again to avoid bancruptcy.

The worst sin is the overwhelming amount of mazes throughout the game. According to lead designer David Fox, these were a disk space and time saving way to make the game longer. But... sometimes, less is more. I'd rather have a short, but consistently good game than boring series' of identical screens in which to get lost all the time!

It's really a pity, because without these fun killers, Zak McKracken would have been just as long and complex and Maniac Mansion already. This way, it's slightly inferior - but because of the obvious advantages covered above, it's still worth more than one look.

Mr Creosote:
Feel free to share anything about Zak McKracken and the Alien Mindbenders (1988) here!
[Reply] 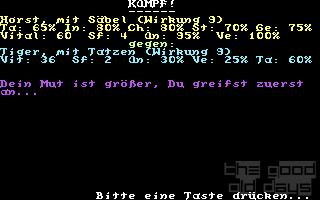