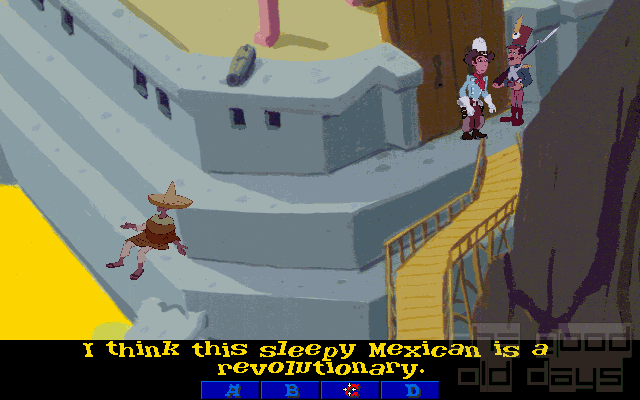 At first glance, the Skulls have it all. Until you realize that the designers chose the lazy way to fill the void left by getting rid of what had been re-interpreted to be player annoyances by that time. Why had older adventure games routinely featured mazes and dead ends? They were an easy way to increase play time, of course. What did the designers of the typical mid-90s adventures do? They filled the endless space on the CD with tons of (recorded, obviously) dialogue. Meaning they exchanged interactive gameplay for non-interactively feeding their "players" what they hoped to be entertaining.

Speaking of characters, the world is obviously inhabited exclusively by genre caricatures whose design is very hit-and-miss. Offering the cliché of the "lazy Mexican", as if this were still the times of Speedy Gonzales, in the mid-1990s – ouch! The gambling addicted sheriff somehow works, but his moronic deputy turns annoying within seconds, on the other hand. The priest without a flock who cannot finish a decent sermon? Not laugh-out-loud funny, but alright. Tastes may differ on this, but one thing is for sure: it's a clear overdose! Everyone having some "wacky" traits feels forced and tiring.

Visual appearance is another mixed bag. The high-resolution cartoon style is one which hasn't aged much. Some colour choices are somehow a bit off, though. And then there are the animations. Great care has obviously been put into some, such as the protagonist's fluid walking, the swinging horse tails etc. Only that there are so few of them that they are re-used at a ridiculous rate. Climbing up a ladder? Sorry, no animation for that available. You'll just "walk" upwards. Between locations, you ride your dependable donkey. No real animation for that available, either: the player sprite is just moved up and down a bit. The big advertising claim of the time was that this game was produced by a professional cartoon animation film studio.