Daughter of Serpents
for PC (DOS) 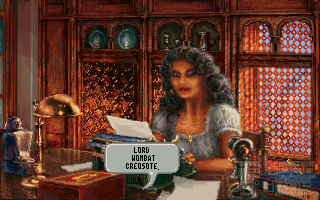 Egypt in 1920. A mysterious artifact found on the black market. Inside: a scroll containing a mysterious prophecy. The perfect prerequisites for the followup of the excellent Hound of Shadow? Yes. A worthy followup? No.

And it all started out so well: the great character generator is still there. Even refined and tweaked, with professional and other skills being seperated. The story - or rather the perspective of the story - changes slightly depending on your character's job and abilities. The old archeology professor get different scenes from the young private detective or the occultist. Too few changes, but a nice try. Then, the first blow: it's not possible to import a character from Hound. Oh well...

Anyway, the main part of the game begins with a nicely drawn, but rather cryptic intro. Some guy is getting off a ship and he's murdered by some kind of lizard-person. Strange. Your character gets into contact with [person depending on your character], but it always leads to the artifact and the prophecy which then gets translated by a professor at the local museum. The unthinkable happens, and suddenly, the player has to fight off some ancient cult which wants to give their gods access to this world again.

Exactly the kind of stuff I'm looking for story-wise. Also, excellent graphics in fittingly toned-down colours. Amazing! Until... the 'player' finally realizes he or she is not playing the game. There is just conversation after conversation. The only little 'interactivity' is that you can sometimes choose to ask for further information on a subject mentioned by clicking on a few words.

Whether you do that or not isn't really important, though. Apart from background stuff which drives the plot along, there is usually one important piece of information in each of the little chats: what to 'do' next. That is, where to go next. To talk to another person. Or one of the old ones again. Since nobody ever tries to deceive you, all you have to do is follow a few orders on where to go and what to say - and the game's over.

That's the gist of it. Not everything, though. There are a few items which you can pick up. About five of them during the whole game. You never really use any of them; it's enough to have them. Good thing, because the interface is so quirky when it comes to handling 'inventory' items that the game is better off without this pointless fiddling around with the mouse.

Add to that that the game is embarrassingly short. An hour (probably half of that if you're just skimming through the texts), and it's finished - without any need for an experienced player. Whoever came up with this non-game should be slapped! It's still a good timewaster for fans of Lovecraft adorers and fans of gothic horror in general - if you take it as what it is: a non-interactive story. What a pity!

Mr Creosote:
Feel free to share anything about Daughter of Serpents (1992) here!
[Reply] 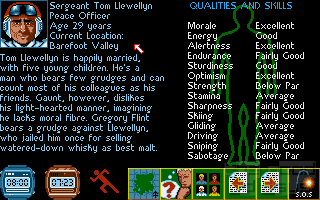