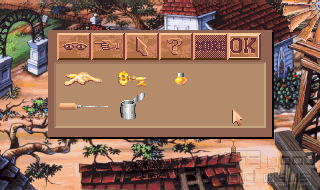 There's lots of prejudice against Sierra's Adventure games floating around. Weak game design, embarrasingly childish wannabe-humor and often also (talking about the 'classics') graphics worse than any amateur could do. As much as I support this kind of prejudice, there are exceptions.

For instance, there is Freddy Pharkas. The humorous Western story revolving around an ex-gunman who lost an ear in a duel and thereafter settled down in a sandy frontier city as a pharmacist, but now has to take out his colt once more, can stand up to the competition.

Then again, it's not the big revolution. The puzzles are mostly ok (even the copy protection has been included into the gameplay very nicely), but a few typical, totally obscure breaks in logic which no human being can understand are present, too. The humor isn't quite as dull as Larry's (which is especially surprising, because the usual Sierra suspects are responsible for Freddy, too), but it also isn't more than smile-once-and-forget.

Graphically, there's really nothing to complain about. The setting which are predominantly tinted in shades of brown are quite pleasant to look at. Gameplay-wise, most of the deadly sins have been avoided. The next goal is alwaysk clear, and there aren't any unforseeable dead ends.

In the second 'act', there are a few time-critical scenes which the player could have done without. Not only can you die thousands of deaths again there, but the time limits are extremely short, and frustration mounts almost uncontrollably.

It's really a pity that Sierra apparantely couldn't do a game completely without such things. Did they have some kind of 'anti-quality control' division which didn't let games without such extreme, and sometimes even insultingly obvious flaws, pass? In that case, they would have failed on the whole in this case, because these 'signs of quality' are just the minority in Freddy Pharkas. I hope a few people have been sacked for this - think of your public image!