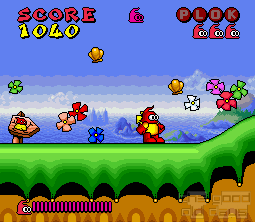 Meet Plok, a rather strange fellow. He has a flag fetish, hates fleas, can shoot off his arms and legs and absolutely hates fleas. Did I mention that he hates fleas? If not, then... well, you get the idea. Plok wakes up one sunny morning to find that his most prized possession, a big square flag, has been stolen. Our brave red-and-yellow hero decides to go flag hunting, and sees his flag hanging on an island just off the coast. When, after much adventure (a level or eight) he has finally recovered his flag, he returns to his island, only to find that it has been overrun with big, ugly fleas! Of course, our intrepid protagonist immediately vows to rid the island of fleas once and for all...

Plok looks like a child's game, but don't be deceived, it's very hard. To this day, I haven't succeeded in finishing it, and I've been playing it, on and off, for years. Even though most levels are rather short (especially the first few), they contain insidious puzzles, difficult enemies and even harder bosses. Luckily, you have the ability to shoot arms and legs to kill them. However, if you use them to trip a switch, they're gone and must be collected elsewhere. This can get annoying, because Plok starts bouncing if he doesn't have a full set of legs. Plus, enemies are much harder when you're, as it were, un-armed.

Plok can temporarily change into (amongst others) a professional boxer, a soldier with a flamethrower and a big game hunter (of fleas, of course). Although I've never come across them, I've read in the game's manual that gift boxes may also contain vehicles. Must be in the last few stages.

The enemies in Plok are very varied. Apart from the omnipresent fleas, there are also hopping young birds, falling logs, fish, paratroopers and boulders with an attitude. The setting is also rather varied. You'll even have to play Plok's grandpa for a dozen levels or so, in traditional movie-like black and white.

The plot of Plok is quite silly, but therefore original. It also has a nice "feel" to it.

It is quite suitable for children, but don't expect them to finish it.

Graphics: 3.5 out of 6
The graphics are good, but they're also what I dislike about this game. They are very, very bright. For children, that's fine, but they occasionally give me a headache.

Music: 3.5 out of 6
Good, but nothing spectacular. Sounds are nice, you hear enemies coming before you see them.

Gameplay: 4 out of 6
Well thought out, but very difficult. Controls are nicely done, but two different jumps (high and low) is a little too much. Sometimes, the damage enemies deal is out of proportion.

Replayability: 3 out of 6
There are secrets to find, but on the whole, nothing new happens

Originality: 5 out of 6
Very original, from the enemies to the change to black and white to the storyline.

Overall: 4 out of 6
A solid game, but too difficult to finish for me. The graphics can be a pain, but they are appealing to others. It's not perfect, but quite good and certainly worth a try.