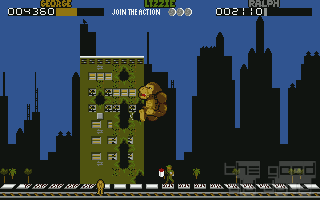 This is gonna be a short one, as there's not much to describe in terms of storyline and plot. Straightforward coin-op/arcade stuff here, which is a genre I usually won't rave about. Rampage has that little something that makes certain games so addictive, though.

I found it in the heap of floppies that came with my spare ST, bought in the early 90s. I put the disk in the drive to see what was on it, and 6 hours later it was well past midnight, I hadn't eaten, and I was beginning to see the red spots that accompany many a long session in front of an ST colour monitor.

You can choose to play as one of three huge animals, a gorilla, a lizard, or a wolf(?). The computer can handle the other two, or a 2nd player may join you using either the keyboard or the joystick, depending on what you've chosen for yourself (stick is best).

After being dropped from the top of the screen on to a row of cityblocks, all you have to do is climb & bash the available buildings. Snacks are provided in the form of apartment dwellers - who sometimes may shoot at you, unsuspecting bathers, and paperboys.

You can and should destroy the police cars and helis firing at you as well, they're easy targets and give you points. Not much to fear from them either, it's far more important not to fall in the muck that may appear at the bottom of a building. That'll reduce your height to about 5mm, slow you down, and you risk being stomped on by your co-demolishers.

This goes on for screen after screen, with short (and repetitive) news reports in between. I've played this game for hours and never saw the end of it. I doubt if there is one, other than some possible monster score. Not important, 'cause it's really all about the wrecking.

The graphics are excellent, there's arcade sound, but no in-game music. The original coin-op was very popular, and there've been many ports to other systems, but not all of them as successful as the one for the ST. Classic fun. Go play.

ardell:
Feel free to share anything about Rampage (1986) here!
[Reply] 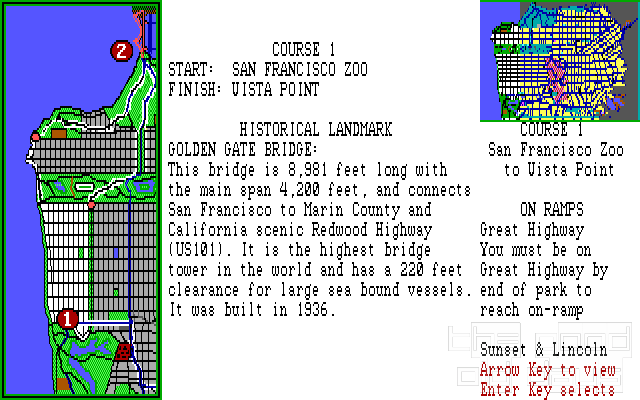