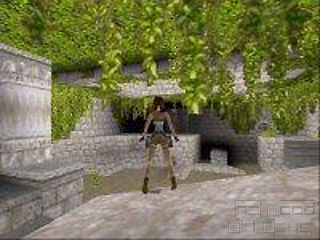 It may be one of the less clever ideas I've had, but I'm gonna try and write up Tomb Raider. The truly beautiful people among us (and I don't mean here at TGOD) often suffer from a defeatist, or fatalist streak in their contemporaries, in the sense that they are rarely approached in a casual manner, due to the assumption that the beauty in question must have lots of beautiful friends already, therefore rendering the unsolicited attentions of the common plebe superfluous. Add a touch of fear of being rebuffed or ridiculed, and presto: Dr Oetker's Instant Loneliness Sour Whip.

Tomb Raider appears to be in a similar position. I know there are many fan sites, some of them very well done (e.g. Stella's), and innumerable references all over the DubDubDub. However, fan sites are by definition biased in their judgment, and most of the net references are short blurbs copied and re-copied, with snippets of general info (mostly about Ms Croft's chest) not necessarily interesting to gamers. They may very well exist, but I haven't seen any 'oblique angle' reviews yet.

If you're still reading, and have swallowed my poor justification for indulging myself in this piece of recreational hero worship (I'll tell you right now Tomb Raider floored me from the first moments into the opening sequence): thanks. Here we go.

People usually call her the female counterpart of Indiana Jones, but that's not quite correct. His Indiness is your stereotypical brawny male (never mind the 'professorial' background), with all the usual accompanying character traits. Lara Croft's persona is a tad more subtle. I'd have to think back to Samuel Fuller's "Gun Crazy" to find an image of a weapons-wielding female who is neither a preposterous Arnold with tits (hello, Xena!), nor a bumbling vamp with a baby .22 in her purse. [Creosote, can I say tits on TGOD?]

The archetype of the enterprising young heiress/society gal who easily matches or surpasses male intelligence, ingenuity, and stamina has existed in Britain since olden days. Elisabeth I, the young Victoria, Ada Lovelace, Agatha Christie, other 'flappers' of the 1920s, that woman pilot whose name I can't recall right now, etc. have inspired authors of children's books and literature alike, thus priming the thinking public for acceptance of the modern woman who won't take shit from Mr Man.

I personally like the idea of women who aren't afraid of ruining their nails/hairdo or handling knives/firearms, who'll still deforest their armpits and legs, and never mind the fact that their feet may reek something awful from a fortnight's imprisonment in llama wool socks and hiking boots. I apologise to those who are eating lunch while reading this. Anyway, Lara Croft is such a woman. The ridiculous bust size is a bit of a downer, and probably only reflects on the lack of motherly love received during infancy by the Core Design graphics team member responsible for the mammary polygon set.

Otherwise, she's real. Far more credible than McHollywood's Angelina Jolie. They should have used that Australian girl (Rhona Mitra) for the movie instead, btw. She had just the right looks and attitude at one stage. But I digress.

When I first saw the game's intro and following cutscenes, I felt like when, as a kid, I was taken to the cinema by an auntie for my first James Bond movie. Pure entertainment, full stop. The story is far from original in its broad outlines (must.. destroy.. evil.. powermonger..), but innovating in the sense that the baddie is a) a woman (thus avoiding a facile clever girl/stupid brute face-off); b) a ruthless business type (instead of the usual mad scientist). That makes her just as credible as the heroine, if not more.

The graphics are excellent. The panoramas of buildings and natural surroundings are outstanding. Then again, close-ups show the limits of the technology of the day, and long sessions can cause headaches, especially when combined with a low-resolution display. I now play the game using Glidos, which takes care of many minor annoyances in that category.

The sound is superb. Nathan McCree's music really elevates the game to a higher level, even if that expression sounds a little overused. It's true though. Broad atmospheric underpainting of splendid vistas, short stabs of tension-heighteners in the spirit of Bernard Hermann, ominous passages prior to dangerous chapters, moody illustrations of mid-game weariness, it's hard to describe the sheer beauty of the score. At the very least one could say that, when game music stays in your head for years, there must be something to it.

The game controls are easy to master and roughly conform to the then existing de facto standards. Their response time is perfect, and actions are executed in the same time a living person would need. Lara's subdued yelps and grunts help to sustain the overall admirable realism. Btw, I recommend using headphones when you're playing near other people. Like your girlfriend, for example.

You can complete the game with a minimum of violence, and without the need for a truckload of medipacks if you wish. It's often enough to keep your eyes open and be very prudent to avoid nasty surprises. But yeah, you can also do it Clint-style. Both approaches are enjoyable, and there are many possible nuances between the two extremes. For instance, I normally avoid shooting animals or other critters when it's not necessary, and save my ammo for showdowns with level bosses and other inevitable conflicts. I once got through the entire game without picking up anything that wasn't in my immediate path. But it's also fun to go in with a full arsenal and do it the American way.

If you have the patience and time to investigate each area exhaustively, you'll find entire sections unknown to the casual explorer, or oddities in the form of strange physics and dynamics - e.g. the corner bug - that open possibilities you'll have to experience yourself in order to visualise them. That last approach is a kind of tourist mode for me, and even after going through the game 8/9 times, I still find new places and objects. Note: walkthroughs can spoil those moments, but I admit they sometimes have their use. You can get seriously stuck. I blame it on the lavish scenery and soundtrack, which occupies brain RAM you could otherwise use for logic and deduction.

Well before there was serious talk of making a Tomb Raider movie, it was clear that the story and settings owed a lot to authors like Rider Haggard and Edgar Rice Burroughs, whose writings were the basis of, or at least provided the inspiration for, hugely successful movies. From Quatermain and Tarzan via King Kong and The Mummy to Xanadu, Romancing The Stone, The Lost World, and so on, audiences everywhere love the genre. I don't know if the recent Tomb Raider flick was considered a box office hit, but I think I saw the announcement of a follow-up.

Anyway, I went to see Jolie overacting her steroid Lara from Burbank part, and even she (I won't mention the other characters' abominable deliveries) couldn't destroy the concept. I saw the movie to the end is what I mean. Just to put this into perspective: do Hollywood germans really always need to be either heel-clicking killers or ex-RAF members? Do the french really need to see another perfidious Parisian ladykiller or comic relief onion seller from the Midi? Well, Englishmen (I deliberately exclude fellow Britons here) aren't all like Hugh Grant or Emma Thompson, living in stately manors, passing their time practising raising their eyebrows or delivering tongue-in-cheek one-liners. For this reason (misportrayal of foreign nationals) alone, I give many otherwise possibly enjoyable movies a miss. But I stayed for Lara, so there.

Back to the game. I don't think it's necessary to go much further into the plot or storyline here. You do your exploring and puzzle-solving, find your exits, ward off baddies, and collect pick-ups, as well as other objects crucial to finishing the game. While you do all this, there's tons of scenery to admire; rocks, cliffs, statues, and buildings to climb (if you're stuck somewhere, and some impossible-looking jump or drop seems the only issue, fair chance that's where you'll want to go); nooks and crannies to investigate (for 'secret' objects); decisions to make (alternative routes exist); and things to try out, like getting to the top of enormous edifices, just for the view. This game will take away a noticeable portion of your life, you are warned.

The consensus among most Tomb Raider die-hards (minimum requirement: play each game at least once a year) is that the first and the fourth (The Last Revelation) in the series are the most adventure-like, and thus the most popular among them. There's less mystery and more shooting in numbers 2 and 3. I don't mind that a bit for once, 'cause it's all quite realistic. No Tesla guns or roto-blasters, no atomic grenades. You start out with a pair of standard automatics and a few medipacks. Better weapons like a shotgun or Uzis only turn up later in the game, and ammo for them is rather sparse, even if you're not a John Woo adept. As I said earlier, you can come a long way without soiling your Karma, so don't be too trigger-happy. Save all the good stuff for the end, you'll need it.

I'm a big fan of rendered movies and cutscenes in games, as long as they integrate smoothly with the story and play. Tomb Raider is generous in that aspect, and the more the series (and technology) progresses, the more animated material is included. Another thing I like is surprises, and there too, the game delivers. There's a moment toward what you think is the end, when you think you're done. Other games could and would have stopped here, added a 15-sec sequence of explosions, and called it a day. Not so here.

That's about as far as I can go without repeating myself or entering already much-covered territory. The Tomb Raider games are still sold, and budget releases from PointSoft often (always?) contain the extra levels that were released between episodes (as far as I know, only one extra level was never sold or made available on CD, namely the one temporarily featured on the web site of The Times - the newspaper), as well as PDF conversions of the original CD booklets. This game deserves to be around forever, and belongs high up there with exotic locale classics as diverse as King Kong, Casablanca, and Apocalypse Now.