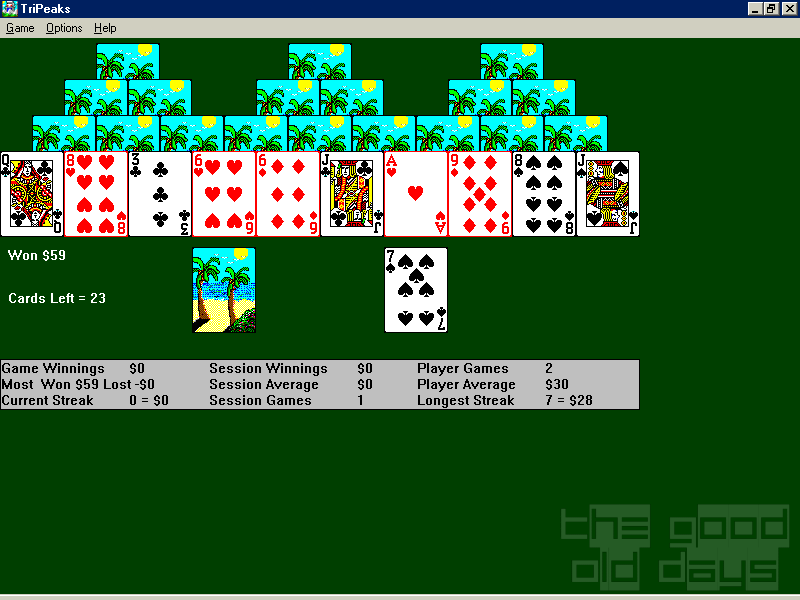 I tend to dislike card games. My father loved them, and he was much better at them than I ever will be. There is one notable exception to this rule, however: TriPeaks. It's a very simple card game. You enter your name, and a deck of cards pop up, shaped like a mountain with three peaks, with all lowest cards revealed. You get the rest of the 52 cards in the deck, all turned over, except one. Say, you get a 5. You must pick a card from the mountain that's either one higher or lower than your current card, so in this example 4 or 6. Then that card becomes your next card, and you have to pick a card one lower or higher than that one. The idea is to make series, or streaks, of cards. Why? Money. You start the game broke. First card in a streak nets you $1, the next $2, the next $3 and so on. Having to buy another card loses you $5. The object of the game is to get filthy rich. It's more difficult than it sounds, however. I rarely get over $200 no matter how long I play. My father easily got $3500 in a single game.
Your score is saved, and if you exit a game prematurely, you get a penalty of $5 for every card still on the mountain. You get a bonus for clearing away the top cards.

It's extremely addictive, and it's the game I play when I have a few minutes to whittle away.
One thing about it is really annoying. You can't save. Your score transfers automatically, but individual games can only be ended. So, if you have to leave, you'll lose quite a few dollars. Bummer. For the rest, it's a nice card game. Also, graphics are good, if standard microsoft-cardgame-graphics. There is no sound. Also, there is no title screen. Another something that's missing is the about: function in the menu bar.

The game features a nice scoring system, that not only keeps your score, but also the # of games played, your longest winning streak, and many other things. If you really mess up, you can always reset your account to zero. Much better than a real casino, wouldn't you say? Another thing that's peculiar about this game is that I haven't yet found a single person that disliked it. Everyone seems to like it, if sometimes only for a short while.

If you're into card games, checking this one out might be nice. If you're not into them yet, now's your chance.