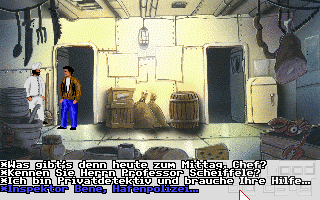 [Mr Creosote] Geheimprojekt DMSO is an Art Department graphic adventure, promoting the rheumatism medicaments by the company Merckle GmbH. Professor Scheiffele of the university of Ulm, who had been working in corresponding product research, has vanished. Right before that happened, he called his nephew Jack Bene for help via telegram. Now it's his task to find the professor and uncover the background of his disappearance.

[Tapuak] Jack Bene is controlled by means of a classic adventure interface. There are six verbs available that can be combined with the objects occuring in the game. Furthermore, you carry an inventory of items that are displayed by small icons. Basically, it's the same procedure as in all graphic adventures: You examine the screen for interesting objects while reflecting what actions could be accomplished by using them.

[Mr Creosote] That becomes easier because the game's locations are rather empty, as there are only few objects that are “meaningful”. In addition to that, most objects are only “visible” for a few intended verbs. If the cursor is preset to “take” and you point at an object that can be examined, but not be taken, you can't click on it in the first place.

[Tapuak] Basically, the controls are satisfactory to their purpose, as they rely on a classic scheme. However, the cursor isn't “intelligent” - there's no way to simplify self-evident commands such as “open door”, reducing the overall efficiency of the controls.

[Mr Creosote] My view is similar: The concept is good, but they were too lazy when it got to the details. In adventures, it's fun for me to try rather absurd actions, but that's cut off here in the first place. Thus, there are no enjoyable reactions to “wrong” operations, because these aren't possible.

[Tapuak] There aren't many objects anyway. Hence, it rather seems like you have to “work off” certain operations that are quite obvious. Experimenting is barely possible, and the controls don't encourage you to try it either.

[Mr Creosote] That takes us to the puzzles: Intellectual feats are not required. Mostly, the game is limited to common actions such as “open door with key” or going through all dialogue options.

[Tapuak] That's right. In the beginning, there's a phase of gathering items in order to fill the inventory. In my opinion, that's typical for simple adventures. However, only a few items are used in puzzles later on. They are used in obvious situations instead.

[Mr Creosote] Exactly – hardly anything is used in another creative way than it was originally intended for. A telephone is there to telephone, acid for etching, and so on. It's always the first thought that crosses your mind.

[Tapuak] So there's a distinct lack of puzzles altogether. In the game, you get on by doing the most manifest action. Adventure games become interesting because of unorthodox solutions, though. Unfortunately, you won't find them here.

[Mr Creosote] From a positive point of view, that also means that you don't need a completely perverted brain in order to understand what the designers expected you to do. During the game, I never thought: “How was I supposed to get this idea?”. Insofar, the puzzles are poor, but I've seen clearly worse ones.

[Tapuak] Sure, at least you can't accuse the game of being unfair. Probably that's due to its advertising purpose. Of course they don't want you to associate the product with frustration. Also, the level of difficulty is low because there are few places that you can visit at the same time.

[Mr Creosote] Generally, the distinction between “macro level” (cities) and “micro level” (screens) is a feature of good adventures. If you have immediate access to hundreds of screens, you lose motivation quickly.

[Tapuak] Yes, but here they were not able to accomplish an appropriate compromise. The respective settings only consist of a very low number of screens. After you're finished at one place, you inevitably travel to the next one in order to follow some trace.

[Mr Creosote] Surely there's a lack of balance, but one is not really fastidious when it comes to promotional games. Think of Abenteuer Europa, where you travel to some countries just to grab one single item from the screen. It's not that bad in Geheimprojekt DMSO: After all, the settings are mainly small worlds, coherent within themselves, with a few links in between.

[Tapuak] You don't do much more than a single action in one room here either. As I said, there are few screens, and there's not even concentrated action in them. Maybe that's less ridiculous than travelling around just for one item, but in principle it's still the same.

[Mr Creosote] That's right of course, but after all, one action per room is better than one action per city. Complexity and difficulty are at a low level, that's for sure.

[Tapuak] According to that, the length of the game is very short: You've finished it in one hour at most.

[Mr Creosote] It's characteristic that I don't even know whether there's a function to save the game. I finished it right in my first attempt.

[Tapuak] There is, and it virtually was the highlight of the game. You have to click at some boxes of the promoted product to load and save. Handling this menu turned out to be the game's hardest puzzle.

[Mr Creosote] Altogether, the game is rather unobtrusive with advertising, though. Sometimes products of the company lie about, and at one point, you have to apply some salve, but that's already all (besides the initial situation which includes a professor working on rheumatism drugs).

[Tapuak] Well, from my point of view, one could almost presume that the game was already done, and the respective product has been incorporated afterwards. It only occurs incoherently to the plot, such as “Oops, now I tripped over a tube of Dolobene”. And the professor could have done research on the “Bifi production secret” just as well.

[Mr Creosote] I didn't have that suspicion, but I can't dismiss your thought. One has to wonder who came up with the idea to promote a rheumatism medicament with a computer game (audience: adolescents) anyway.

[Tapuak] Rheumatism treatment and prevention is an issue that the entire society is concerned with. In particular, adolescents have to be sensitised for this problem. Now I've got a bunch of Rheumabene tubes at home finally.

[Mr Creosote] In this case I withdraw my objection and praise this effective education policy.

[Tapuak] At that time it was a common trend to utilize computer games for promotional purposes. Geheimprojekt DMSO shows the strange results that this trend has brought up. Probably the marketing managers wanted to be extremely smart when they came up with such ideas, even if they completely missed the audience.

[Mr Creosote] So it's a historical document of highest value for mankind's cultural evolution. But all joking aside: Geheimproject DMSO is an out-and-out typical promotional adventure. It's short and easy, and in end it smells of work-for-hire. In comparison to similar competing games it's not basically bad, though. After all, it has adopted some design aspects (controls, setting structure, puzzles) from more professional games, even if there are significant flaws concerning their implementation. Graphically, it's really nice to look at (apart from slightly distorted humans); I especially liked the application of muted, unobtrusive colours. Altogether, it's of course in no way a competitor for commercial classics, but it's well worth seeing because of its own weird kind (mind the subject).

[Tapuak] I agree with that. Eventually, Geheimproject DMSO is not a challenge, but rather a lightweight pastime. However, that's always better than overtaxing the player with unfair situations. As you can't fail or even die, the game is solved quickly, and it remains as an oddity among the computer games. 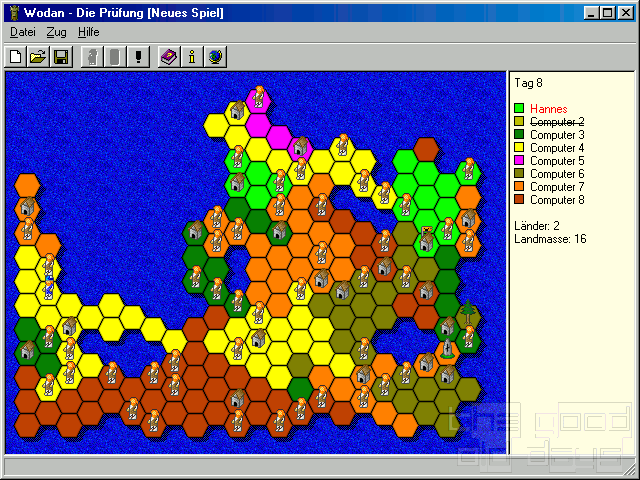