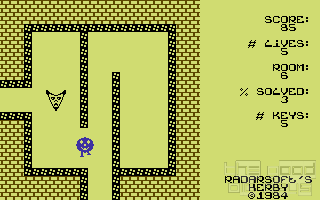 Herbie, the lovable Volkswagen Bug whose whacky adventures everyone has been following in the 60s and 70s, is back on the big screen with 'Fully Loaded'. Haven't seen it, and don't plan to, but I guess it's bad. However, legends can't die, no matter how awful this new version might be. We'll always have the original.

This game bears no relation to Herbie, the car. It's about Herby (mind the spelling), some undefinable creature made of a huge round grinning face and two legs. For some unknown reason, Herby is stuck in some kind of labyrinth, and he (it?) has to escape with the help of the player. The rooms of the maze are rigged with traps (electric walls etc.) which, upon touch, decrease the amount of Herby's lives. 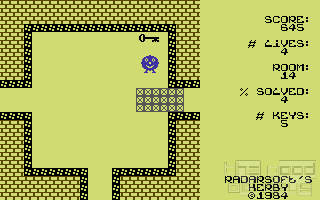 In addition, there are triggers which cause a previously unknown event. This can be good or bad: teleportation to another room, the light being turned off and so on. Also, don't forget to pick up the keys which are lying around. So, on the whole, pretty much your typical maze-related stuff.

Maze games live from their complexity and the originality of thir puzzles. Herby has neither: Within just two minutes, the 'Solved' percentage is already up to 20. And that just by walking through mostly empty rooms with one or two simple barriers going on and off with a certain frequency which makes it possible to slip through easily.

The graphics which consist just of yellow, black and blue would be appropriate enough for a puzzle game, but they can't save anything, either. Combined with the rather obscure and unintuitive nature of the game, what we get is a document of its time, but not one worth more than the curiosity gained from pure nostalgia. Much like the other Herbie, eh? 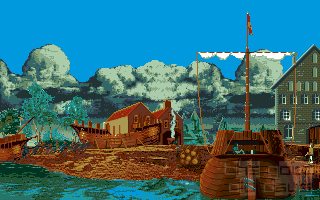