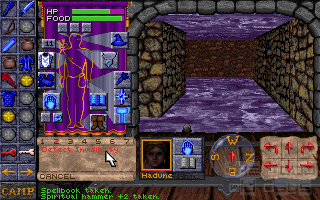 Sent to a fort in search of a mystical orb, you will kill all that moves while descending levels towards the lower depths of the dungeon. All of it seen in first person through the graphical engine of the Eye of the Beholder trilogy.

But this time you won't have an adventure, this is just a hack & slash, but with the good point; that is having a dungeon customization system. When you start playing, the depth of the dungeon, the quantity of loot, monsters or food, how quickly you get hungry, how many traps you will find, if you will find level sucking undeads and more options can be modified, and that, with the addition of randomly generated dungeons, gives a good deal of playing time.

For the gameplay it uses the Advanced Dungeons & Dragons rules. So the character development is based on levels that raise as you earn experience, mainly from killing enemies, to make your character, chosen from a mix of stereotypical professions and races, stronger and more deadly.

You can be a melee fighting warrior or a lockingpicking thief, or, if you prefer using magic, a defense and support oriented cleric or a more offensive mage. Also you can chose a multiclass one, which mixes two or three of them at the expenses of slowing the level raise, a sacrifice that may be worth as you can only have one character.

One of the main problems in the game is that the interaction you have with the dungeon doesn't have depth. You can pick locks, if you are a thief; spot illusionary walls, or climb up from pits, or if you have luck you may find some magic orbs that heal when payed. But your problems won't ever go beyond having to find a key, or an object, to open a door, and your special findings will be, if lucky, just a new object to use. And so it happens with the diversity of classes. They mainly give you different ways of killing or avoid getting killed, even though there are a few interesting spells like 'breath water', or 'detect magic'; or some special skills, like the magical instruments only usable by bards.

In the end, it is a fun game to play once in a while to try a new dungeon or finish the one you are in, or just to kill senselessly with your character... It would be good if there were the possibility of keeping your character after finishing a dungeon, as it is likely that you won't find all the mage scrolls, or a complete set of magical armor and/or weapon to receive the bonus they grant.

NullVoid:
Yes, Dungeon Hack is nothing more, nothing less than a Rogue clone that happens to also be a licensed Advanced Dungeon and Dragons product. It's even reusing an existing engine (Eye of the Beholder III's Aesop engine). Basically what Dungeons of the Necromancer's Domain aspired to be, with silly pseudo-3d graphics.
Wandrell:
Well, there are better adventure games, look at the other RPGs in this page for example. Dungeon Hack is a fun game when you only wish to enter a dungeon, but lacks depth.
K:
Dungeon Hack is the BEST DOS game I have ever played, and i am very happy to find a copy again. I think anyone who loves AD&D and has a sense of adventure (and doesn't care about grafics) will absolutly love this game!!!
Eagle of Fire:
I remember playing that game a long time back in the days. It's fun, and it's a real challenge to manage to complete it.
Tuss:
The random level generator makes the game extremely difficult at times, as there can be a item eating monster and really chew up your equipment. Also sometimes you have to buzz through the water filled levels. A great point in this game is that you can throw anything, just put it in the dungeon window near the top. They go mighty slow and if you move forward to quickly after throwing the item, you can get damage from the item!
Mr Creosote:
I quite like this game. Not too RPG-like, it's just a Hack clone, and a very good one. Compared to the Beholder series, I prefer the restriction to one character and even smaller complexity. Nothing fancy, but just simple fun.
Wandrell:
Feel free to share anything about Dungeon Hack (1993) here!
[Reply] 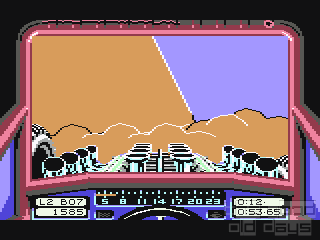