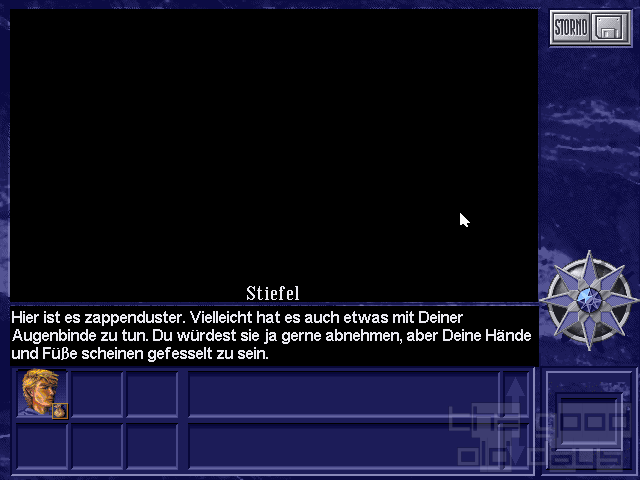 Legend followed up their excellent Death Gate with a game which is quite similar on the surface. It uses the same game engine, graphics are similar and it is - again - based on a popular branch of fantasy novels: Shannara. The game isn't a direct 'port' of any book, but it takes place between the first two. Some evil warlock called Brona, whom the father of the game's protagonist Jak apparantely killed in the first book, is back. He can only be defeated with the 'Sword of Shannara' which in turn can only be used by offsprings of the Shannara family - namely you and your father.

After some squabbling with several monsters, a poisoned king and magical barrier, it turns out the sword has been destroyed, and only the combined magic of Elves, Trolls, Dwarves, Gnomes and the old Druids can bring the pieces back together again. So you not only have to find every race's most powerful magical artifact, but also avert wars between them to get them to work together. On your travels you'll not only meet passive people who kind of belong to the scenery, but also companions who help you in any way they can. One of the first persons you meet is Shella, daughter of one of your father's friends. Later, the dwarf Brendel (a close relative of your father's friend Hendel), the troll Telsek (son of your father's companion Keltsek) and many more. You see the pattern.

Gameplay-wise, Shannara doesn't offer much to seasoned adventurers. The game engine's ability to show numerous verbs related to the active object as options which was so effectively used in Death Gate is hardly recognizable, because the verb lists just haven't been populated. To make matters even worse, the game's 'suggestion' what would be the logical action is pretty much always the one which is actually required, so in the end, it's nothing but a 'one click does all' control.

That doesn't help the difficulty of the puzzles, of course. They aren't overly complex or imaginative anyway. Use keys to open locks, pick up things which suddenly appeared in a place you previously searched, but which needed an unrelated event trigger and talk to everybody about everything. Especially the latter quite often gives you additional hints about what to do next, even if it's already totally obvious. The game's long enough as it is, but it can still be played straight till the end without any brain busters stopping you longer than a few minutes.

There's another huge burden on the game. Travelling between cities is done manually on a map of the country. For some reason, you're sometimes not even told in which general direction you should head to reach your destination, making you wander around aimlessly. Nothing happens on these journeys, so the point of it remains a mystery. At least nothing productive - just pointless fighting. Totally breaking with the traditions of the adventure genre, Shannara forces you to sit through some terribly unexciting turn-based battles with monsters which you have to win, because otherwise, the game's over. They are usually easy enough to win, but sometimes, you can run into a total rut just by killing enemies off in the wrong manner or order. More than enough of these battles have to be fought to advance in the story, but if you want to give in to your masochist side, you can seek more conflict with monsters on the mentioned travels. Again, for whatever reason.

I'm sorry to say it, but there's little not to hate about this game. The gameplay is trite and boring, and don't even get me started about the awful story! Real characters don't exist, every characterization is only done by 'race' and nothing more. There's nothing in this story which isn't a (bad) stereotype. And there are plot holes of the size of Australia (for the book enthusiasts: I'm talking about the game's internal logic, so don't give me any of that “read book xy and it becomes clear” stuff); I won't list any for the sake of avoiding spoilers, but I'm open for discussion about this point as I know some people seem to disagree. My only hope is the books are better in that respect.

What Shannara has taught me is that the producing company can only save a game to a certain extent. Legend's well-done basis shows, ensuring at least average quality if one tries to look at it objectively (unlike in the last paragraph). What's more important seems to be a game's design team, though. Death Gate was made by Glen Dahlgren, a company veteran who was involved in most of Legend's previous (excellent) adventures. Shannara was executed by Lori Ann and Corey Cole who are mainly known for the Quest for Glory games. Not exactly a selling point. Shannara doesn't help to improve this reputation. A game for completists and maybe beginners who are scared of real challenges and who can also enjoy cheaply mass-produced fantasy stories without any originality.

Haven't read any of the books, so I can't comment on that. As for the game's rating, I actually did contemplate 1 or 2, because - as I said - I do hate the game with a vengeance. Especially that story - one of the worst I've ever seen! The dialogue is so badly written it hurts.

However, I did take a look at my own definitions of the ratings again. '2' already means it's too bad to finish. I never had a problem with finishing this game. They did avoid total frustration in the gameplay apart from one or two minor things (which are mentioned in the review), so I tried to give the game the benefit of doubt and gave it a very positive rating.

In case you still remember your password, you're welcome to add your own rating, of course

3/6?
From your review and my personal experience with both the game and the book series, 1.5/6 is too much

The only worse fantasy book series I've ever read was Magic Kingdom of Landover-from the same author. 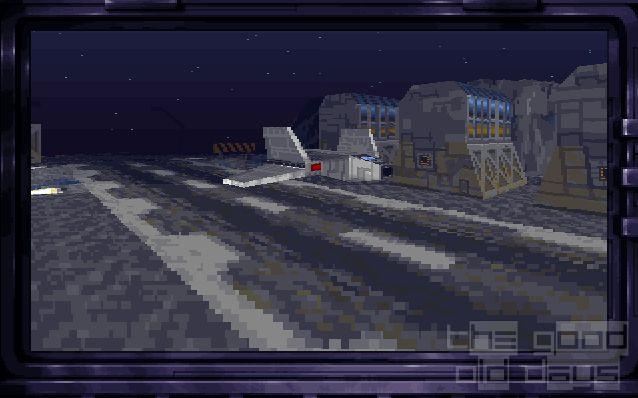