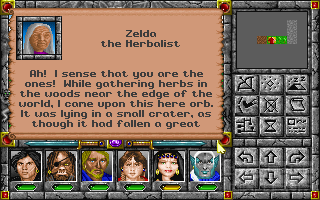 World of Xeen is the union of Might and Magic 4 and 5, got from copying xeen.cc from MMIV to the MMV directory. The game gives you the two sides of the coin shaped world of Xeen to explore in your quest to wipe the evil out from it, and a third, and short, new adventure.

This isn't a complex or deep game, it just has a lot of enemies to dismember while exploring the land, its cities and the dungeons in search of keys that will get you to new places to clean. Few things will give you something that is not directly related to violence, just a few spells for travelling; or the skills, that may allow you to travel through different terrains, activate the automap or give you a natural compass.

But even not being a too good game it has some things that are good, like being able to break doors and walls by throwing yourself to them; the special option that gets you back to a secure place, for a price, if you get stuck; the titles that you get by finishing quests, findings things o doing something, which mainly just serve as a mark for exploration and completion; and many places to explore, with a nice range of special objects and locations.

And also it has problems. The character development is unsuprisingly based in levels, typical species and professions that just affect which of the two kinds of spells you can cast, if any, and if you have the rarely used steal skill; the puzzles are normally too simple and easy; and the graphics are irregular and sometimes look like they were taken from different games.

May be a fun game if played from time to time, but not if you do so for a long time.

As a note, the game is just like MM4 and MM5, no new skills, no new spells, no new characters... The only differences you may notice are from the parts added from one or other game, if you already played one, but the games where so clearly made to join each other that it looks more like an expansion with a few additions than another game.