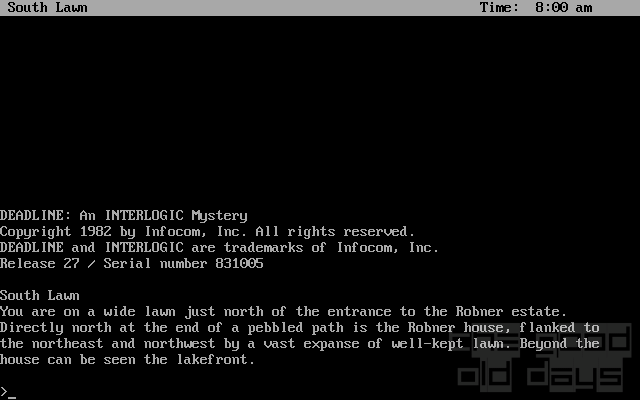 Industrialist Marshall Robner has been found dead in his library. The room had been locked from the inside, and an overdose of the anti-depressants he had been taking has been found in his blood. A clear case of suicide? The responsible inspector seems to think so. The deceased's lawyer provides you with an interesting piece of informaton: Only days earlier, Robner said he wanted to change his will. It never came to that. How does that fit into the suicide theory? You're asked to investigate once again to see if your colleague was right about what he found.

Deadline was the first non-Zork game Infocom released, and it started off the company's successful mystery branch. Several new commands were included for this purpose. You can analyze items for specific substances, take fingerprints, accuse people and so on. This is documented in the manual, along with the interviews made with the potential suspects and the report of the medical examiner. The information found in there is crucial, so don't expect to get anywhere without reading it.

What set the game apart even more was the concept of 'real time': with each move, a minute passes, and things are happening all over the estate and house all the time. Characters are moving around freely, following their own agenda. Some events are occuring in certain places at fixed times, whether you're present to witness what's going on or not.

Very realistic, but it harbours a big problem gameplay-wise. What happens if the player misses crucial events? Well, the game will just become unsolvable then, without the player noticing. Same goes for many puzzles - any player without precognitive abilities won't be able to forsee what's coming and thus won't be able to solve many of them. Prepare for lots of saving and restoring. This has to be taken as part of the genre it seems, as no later game by any company managed to solve this.

What lifts Deadline above the competition is two things: difficulty and diversity. The game offers easy ways to early successes. For example, it's quite simple to find solid evidence for murder by just doing some routine stuff you should know from detective novels or movies. It seems like pretty much everybody had a motive. How the first inspector could have come to the verdict 'suicide' is a mystery given the amount of clues against it.

With so many leads to follow, and so many different pathes to investigate, most of them have to be red herrings, of course. It's still fun to follow them, because they're all fleshed out very well. Actually cracking the case is very hard, on the other hand. Even if you're convinced you've found out who did it and in what way, you still have to prove it all. Means, motive and opportunity. Only a conviction by the jury counts in the end.

There are even different levels of success. You might manage to get someone found guilty in the end, but not without more lives being lost. Getting to what I'm convinced is the ultimate, 'best' ending took me ten years. No, not of continous playing, of course, but still all the notes I had taken could have been turned into a small book - if I'd still be able to read some of the older ones.

An Adventure game which which is so hard, but still motivates to stay 'clean' and not to use any hint systems of solutions can only be considered an extreme rarity. What does usually happen when a player is stuck? Check with a walkthrough to avoid frustration. Deadline doesn't frustrate, but failures only increase the motivation. Incredible!