The Witness
for PC (DOS) 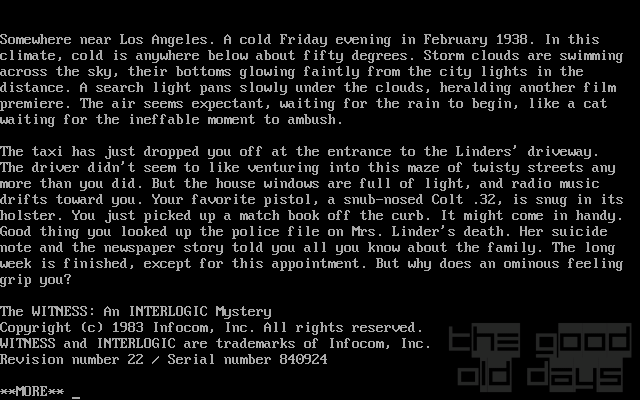 Los Angeles, February 1938. Freeman Linder has received what he believes to be death threats from a man called Stiles whom Mrs Linder had had an affair with before her suicide. Linder asks the police for their protection and he gets it. A detective (the player) is assigned to be present at the Linders' home on the evening Stiles' telegram to Linder talks about.

Even with a policeman sitting in the same room as him, Linder is shot in his office. A shadowy figure, whom Linder had apparantely identified as Stiles a split-second before his death, had stood in front of the window. As frustrating as losing the person you were supposed to watch after is, the case seems to be obvious. Or is there more to it?

Witness is what Infocom made from the player feedback they got about Deadline. The main criticism was obviously 'too hard'. Witness solves this dilemma on many different levels, the most obvious one being the reduction of characters involved. Apart from yourself, the victim and Stiles, there's just Monica Linder (the victim's daughter) and the Asian servant Phong. One of them has to be the culprit, and the rule of the obvious solution never being correct eliminates one already.

The case itself isn't overly complex, either. The first part only builds a weak smokescreen of pseudo-interactivity. There's nothing the player can do but follow where he's lead and watch as Linder is killed. There's no way to prevent the murder which is quite unfulfilling, especially since the game in many ways pretends it could be possible.

The murder itself is constructed in a very clever way as it turns out. Absolutely nothing to complain about there. The problem is rather that the player is nudged into the right direction too clearly. It's harder not to figure the way Linder was killed out than the other way round. Figuring the method out is almost synonymous with finding evidence of who did it, so put brutally honest, Witness is a one-puzzle-game.

It's rather unfortunate that Infocom fell from one extreme (extremely hard) to the other (extremely easy). Story and characters leave absolutely nothing to be desired (apart from the usual 'more'), the setting and writing do their job to create a fitting atmosphere. In the end, certainly a very fun game, but it lasts too shortly to be fully convincing. A good starting point those who just want to get a first glimpse at the genre, but even Moonmist (made by the same designer and marketed as an 'introductory' game) offers more of a challenge and is therefore gives a more accurate taste of what's to be expected.