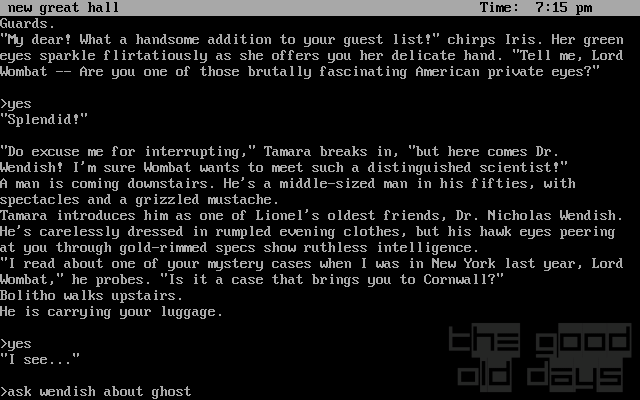 The player takes over the role of an American detective who has attained some fame by solving tough cases. One day, he receives a letter from his old friend Tamara Lynd who's going to marry an English Lord soon. Back in her fiancée's castle, a ghost has started to appear again, targetting Tamara in specific. Is it actually the legendary 'White Lady' or the ghost of the recently deceased Deirdre? Or does everything have completely worldly causes? To solve all these questions, you've been invited to join your old friend over in the 'old world'.

Moonmist treats new ground for Infocom games in some ways. It lets the player choose his or her name (and by that the protagonist's gender), influencing some people's reactions within the game. The most important decision is the answer to a seemingly irrelevant question about your favourite colour at the beginning of the game, though. This answer triggers one of four pathes through the game.

These pathes differ mainly in their conclusion. The question who the culprit is, and also what kind of treasure lies hidden within the walls of the castle. You'll get different cryptic clues and a few different puzzles each time. What stays the same in each path is the general structure of the mystery: the ghost has to be found, and some of the essential clues are always found in the same places.

That is why the promise of four full games isn't fulfilled. Once you've managed to solve one of the 'cases', the next one is a lot easier already, because some parts are just the same as before. Each path is also relatively short, so it's the overall length of all of them combined which can be compared to other games of the genre.

This also makes it relatively obvious where Moonmist is lacking: complexity. Compared to Infocom's other games, puzzles are mostly on the easy side, and there's little room for interconnections of actions due to each path's shortness. On the other hand, characterizations of your hosts and the other guests are top notch and the basic story is as classy as it gets. A great Adventure game for newcomers to the mystery genre and a nice diversion for veterans who have already mastered Deadline, Suspect and Witness. 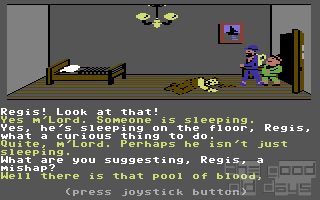