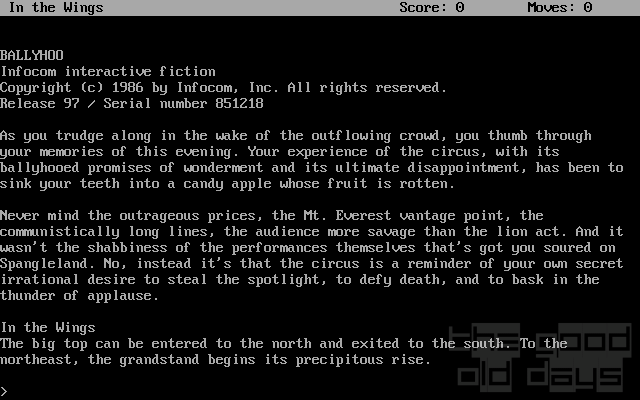 In spite of a few visits as a kid, I've pretty much always been quite a cynic about the circus. Ballyhoo is all about the circus. So insert your favourite fuzzy stereotypes here as I'll neither be listing them, nor be talking about 'the magic' or whatever. This game is set in the circus. The owner's daughter has been kidnapped and she's held for ransom. The player has to find her, because the detective who has been hired to investigate is a clueless drunk.

So, this is another mystery adventure. It's very much unlike the better known ones. There are no real time events. Instead, the player is treated with a slowly expanding game world. In the course of the investigation he finds ways around previous obstacles, discovers shortcuts and secret passages to new parts of the circus ground.

Although there are a few well-known components, like listening to other people's conversations, the focus is on the puzzles. Some puzzles trigger clues, others open said passages and even different ones for example make a certain character go somewhere else. All event based instead of a clock ticking with every move.

All this can only lead to one conclusion. When it was released, Ballyhoo was untypical for its genre. However, 20 years later, we all know how it developed later on: real-time adventures faded into obscurity quickly, and event-based ones turned into one of the most popular genres for some time. In that respect, Ballyhoo feels much more modern than much of the competition at its time. One aspect which makes this absolutely obvious is the limitation of the game world at the beginning and the ways to 'unlock' more.

This modernness makes gameplay very relaxed (no time pressure). Enough time to tinker with alternatives, fool around with characters and basically do everything you like. And when it comes to the beef of the game, the puzzles are hard enough to keep the player thinking for a short while. All this results in a very positive impression. 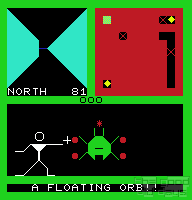