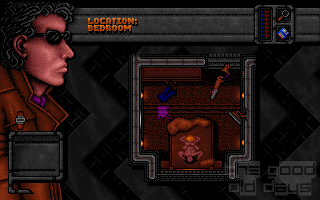 With its explicit illustration of madness, DreamWeb is clearly not thematically in line with the mainstream trend, even though bloody visuals about serial killers are quite traditional in the film industry. On this matter, DreamWeb purposely allows the player to choose whether Ryan is really just a brutal murderer or the sacred tool for saving humanity.

The desolate state of Ryan's psyche is expressed in his diary entitled: “Diaries of a (Mad?)Man”, which is included with the game in printed form. Within the setting of a dystopian metropolis of the cyberpunk age, he is confronted with a call for contract killings. The perhaps only imaginary guardians of the thousands of years old DreamWeb themselves would have chosen Ryan to save the world from destruction. In the course of the game, he learns from them that the souls of deceased people return to a reservoir of souls on hidden pathways of the DreamWeb. Evil forces have taken possession of 7 people in the real world, threatening to negatively affect that sacred well of souls. The elimination of these enemies is in Ryan's hands. 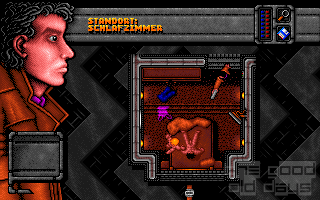 As expected, the blood will now start pouring: there is a merciless pixelated slaughter of countless innocent people who get in his way as he pursues his targets. He willingly carries out the execution of a rock star who is having sex with a groupie. The negative climax of his deeds is a headshot at a woman whose abdomen prior has torn been off by an explosion Ryan caused. And yes, the game is rated above 18.

The crossover of psycho-thriller with the cyberpunk genre is clearly reflected in the choice of the to some extent clichéd settings: a seedy bar with an obligatory slot machine; the back room in a club with the mafia-style arms dealer; powerful corporate headquarters ruled over by a demon-like strongman; an abandoned church for the showdown with the renegade arch-villain; abandoned underground tunnels with secret lairs of maniacs.

The puzzles also follow these cyberpunk approaches: secret codes for opening doors; manipulating lift switchboards; using a computer terminal with various cartridges. In the middle section these references to advanced cyberpunk technology appear to be more and more implausible: an electricity distribution box buried in the sand of an ocean bay? Additionally the box cannot be opened with a knife or screwdriver, but (spoiler alert) with the broken-off part of a railing from the previous screen. A puzzle design that makes you shake your head.

At the end of the game, the puzzles are getting boring and to a certain extent even annoying. They follow the pattern: pick up object A and place it two screens further at B. On the fun side the only relevant objects are also distributed in exactly the same scene. The player seems to be only an extra in an interactive film. But missing the diary mentioned above could really cause headaches. It contains essential clues for solving some critical puzzles. The possibility of situations in which the game can no longer be solved from a gameplay point of view is worth to mentioning as well. The only thing that helps is to restart or load an old save game.

The presentation of the game is from a top-down perspective throughout. This creates the strange feeling of looking at a building’s layout plan. The environment is only sparsely animated: a spinning fan; the nail file of the lady at the reception. For the most part, Ryan is just standing still at a place and can only be moved by a concrete interaction. In a small additional window, the currently focused area of the main screen is displayed enlarged. With its help even small-sized objects can be identified.

The flats of the protagonist and his girlfriend at the beginning of the game are virtually crammed with objects that can be examined. From the multitude of individual objects, the player must transfer the relevant items into his limited inventory. The point'n'click controls for inventory management are somewhat awkward. But it fits well into the game as a technological metaphor.

In the CD version, almost all conversations are spoken and the synchronisation to the German language has been professionally carried out. The CD also contains a bonus track of the used in-game music. This music is greatly suitable to reinforce the basic visual mood and positively enhances the overall enjoyment of the game. 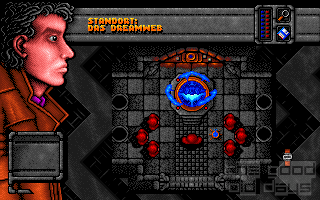 The reservoir of souls

DreamWeb offers an impressive experience at the beginning, but the story, tension and creativity of the puzzles flatten out rapidly towards the end. You get the feeling that the designers ran out of ideas. For some inexplicable reason, the very small playing area has a huge image of Ryan next to it. This visual idea seems to be more like a space filler and certainly is an anachronism of that 90s era. However, the really well-done soundtrack, the well-articulated German voice-over and the rather remarkable story can breathe a good portion of life and cyberpunk atmosphere into this poor basic framework. The reference to the enclosed diary is also an innovative idea.

In this respect, the game is extremely ambivalent. Adding up these positive and negative aspects to an average overall rating would not do the game adequate justice. In my opinion, DreamWeb stands in line with a number of iconic psychological thrillers such as The Silence of the Lambs or Se7en. As a game, it is a real enrichment for the otherwise so perfectly softened adventure genre.

Night after night it has been shown to you in dreams. The dreamweb is unbalancing. Seven evil people, parts of the its power incarnated, seek to use it for gaining control over the world. Eventually sending the planet to its doom.

Being the only one who can avoid this you prepare yourself and embark in a search for those who must die. It is a violent job and all your targets will end with their broken bodies covered with blood.

Blown off heads and dismembered bodies may be not a thing that will impress too much in pixelated images, but these were some of the first bloody and gory images of the videogames (along with one of the first explicit sex scenes), and the violence it contains is not dissolved by the graphics.

The short story, that develops in only one city even though the main character is looking to make a world impact; and the linearity do not avoid that story from being the best part of the game. The dying city's mood and the approaching end of the world, the murderer with mystical objectives that is the main character, and the seven evil people, with different personalities each; along with the onirical dreamweb that joins it all creates an absorbing plot.

One of its faults is in the interface. It is good, but not well used. Every room is filled with objects which you may take if you wish, but rarely serve for something more than creating confusion. You may even equip some of them, but this seems to have no true use, as happens with the sunglasses, which only change the look of the character's image that always is decorating one side of the screen.

But it also has an interesting point when using a network terminal. You give orders to the computer for getting the latest mail and headlines, examining cartridges and also passing the game's protection when introducing your personal password. It may look somewhat clumsy, but gives the impression of being really using the terminal.

A thing to be noted before playing. Good part of the background, along some information needed to finish the game, is in the “diary of a madman” which came with the game. Perhaps a bad point, as it divides the story into two different formats. 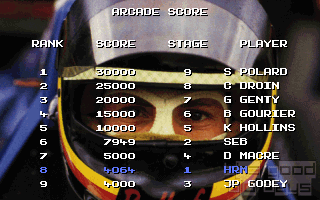