Conquests of the Longbow
for PC (DOS) 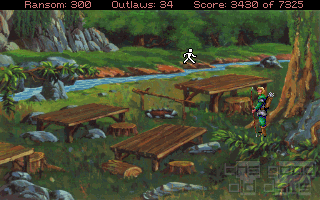 Sierra's attempt into creating a Robin Hood themed game has resulted in a strong adventure game.

This standalone adaption of Robin Hood, is one of the Sierra games lacking the (oh so charming) text parser. A blessing for most players perhaps, but for the old adventure game purists like myself, it might require some time getting used to.

Story-wise there isn’t much to say here that most people don’t already know. The game starts with Robin and his band for merry men already formed and it’s not until later on you encounter Lady Marian. Of course your basic task is to get as much of ransom gold to free King Richard, while in the meantime stay out of the hands the evil sheriff’s men. The foundation is there, you get to steal from the rich and help the poor. Bow shooting is presented in a nice sort of mini-game and even the famous split of the arrow makes its appearance in this adaption. The only one that seems to be missing here, is Guy of Gisborne. Oh well, he was a bit of a bastard anyway…

The graphics of the game might be somewhat of a letdown. The use of colors appear to be a bit cluttered. Especially in crowded scenes the artwork seems to be a bit sloppy. In other scenes however the hand-painted artwork manages to stand out nicely. Robin himself is pictured as an older scruffy looking archer, not the kind of hero you might suspect and certainly no Kevin Costner! Also some of the animations seem to stutter a bit and appear less fluently. The sound however is beautiful, especially for those that can listen through the Roland version are treated with a lovely soundtrack.

The game itself and the puzzles presented are filled with lore and mythology. More than once this game reminded me of Conquest of Camelot. You are required to solve challenging riddles, learn how to use hand-codes, identify gemstones and much more. The game also has some entertaining encounters, in which you have to disguise yourself, fight the bad guys and make tactical decisions with your band of merry men (and a woman not to forget!).

In conclusion, Conquests of the Longbow is a challenging game with lots of variety. Perhaps not Sierra's best, but entertaining nonetheless.

When he was coming back from the third crusade, Lionheart has been captured. His brother won't allow the ransom to be paid for the true king, but the kidnapping cannot be kept a secret and a group of loyal men will try to build up the sum of money to get him back.

In this story you will take the role of the famous Walter Scott's character, Robin Hood, along with his loyal band of brigand and longbow, a weapon that takes an important role in the game. It will be indispensable in the shooting tournament, but also used to menace people, or kill them.

But you should not act remorseless, as there is usually a better solution than violence. Actually there is always a better and a worse solution to the problems, as the game has a well worked out, branching story, where you may commit mistakes or do the things well and keep playing up to the end, or until you get stuck in a dead end. Having multiple solutions and such a branching game means that you may give away a vital object, affecting the ending; or not expect a guard to be intelligent enough to see through your improved disguise the second time you cross in front of him, getting stuck.

There are also some minigames spicing up the game. A fight with quarterstaffs, a drunk man who plays nine men Morris and the range shooting. There is the option to skip those games if you can't beat them, you will get fewer points, but winning the archery competition can be truly a feat.

Adding to this all is the story, which gives a celtic flavour to the forest and an entertaining version of the overused story. You will make rescues by yourself or with your men, use disguises to enter the town, fool the not too bright abbot and sheriff and get the help of magical objects and beings.

Among all of the unique bits of the game one of the more interesting is the druid hand language. It is part of the game's protection, which at difference to other games is not a sudden necessity to introduce a code, but questions of lore, that in this case will be useful more than once, as it allows you to talk to the druid's plants to ask for their help.