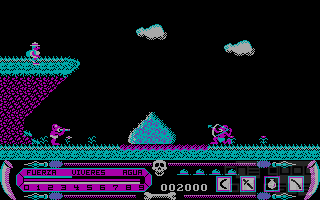 As one can suppose from the title (which means “Livingstone I presume”), you are exploring Africa in search of doctor Livingstone. A thing that consists in jumping through platforms, avoiding enemies and traps, and using your set of tools.

The main point of the game are those four tools you are carrying around. They are a boomerang, which does a circle around the screen; throwable knifes, that gradually fall as they advance; grenades, thrown in a parabola to create an explosion, which last some seconds, wherever it touches; and a pole, for jumping long distances. The potency of each of them is controlled by a power gauge, the longer you press the button the farthest you will reach.

As expected, your path will be filled with enemies. From the more common ones, such as snakes and lizards, which move through the floor from one side to another; man-eater plants, awaiting for you to come near or the bats, flying around caves; to the more interesting ones, as they have some kind of skill, such as monkeys, which stun you with their coconuts; the mermaids, that do the same thing but throwing kisses; the hermit, who may appear through a side of the screen to shot you or the hateful eagle that will do all it can to take you to its nest.

Your objective will be to explore and find a bunch of jewels to open a door of a temple. For this, the level are not designed in a way that makes you cross one screen after another, forgetting each previous one. It is always possible to go back, and sometimes the zones have a loop pattern and branching ways. After you cross that temple I'm not sure what you have to do, as I was only once capable of reaching so far.

The game's difficulty is high. It's not that it is difficult to go through the levels, they are well done and varied; or that the enemies are unbalanced, as they are never too many and usually can be somewhat easily avoided or killed. Also neither it's that the food rations (víveres) and water (agua) gauges descend too fast, nor the goods for them are scarce. The game is difficult, you will die a lot, and perhaps not reach too far, but you won't feel that it is the game's fault.

Why it is hard? Well, I fear I don't know, perhaps it requires more doing the correction action in the correct place than quick reflexes, at a difference of the new games. Perhaps the main characters moves too slow or maybe the weapons require a better coordination than the more usual ones, but anyway, it ends being more hard than other modern platform games labeled as difficult.

Moebius:
And another formerly Spectrum game, only re-painted to fit CGA palette...

Pretty much the same difficult as Goody.. however, Opera Soft had better games, in both playing and graphical sense.
Wandrell:
Feel free to share anything about Livingstone supongo (1988) here!
[Reply] 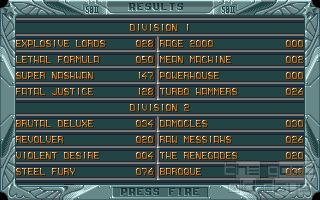