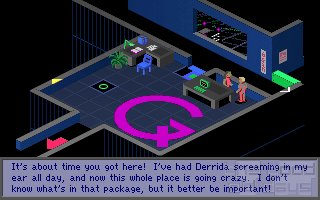 An urgent job sends you to GenCorp, where a man called Derrida urgently needs a parcel. But something has happened and the place is filled with bio-weapons and security systems through which you will have to find your way.

To reach the man, who is in the 89 level, you will have to cross nine levels filled with puzzles, hidden buttons, secret rooms, electric eyes and a few keys to reach each of the elevators that will carry you to the next one, helped by a few objects found in your way, mainly grenades, a shield or a time stopper with luck and perhaps a bomb. But your main tool and weapon will be the laser gun.

This gun shots bounce around and the correct use of them will be necessary in many puzzles, where you will have to find how to shoot. And also with a bit of skill will be really helpful against your enemies.

Those enemies are mainly the neogens, artificial beings with mimetic skills that come in four variations. The more common, the generation A is a red ball that jumps over its preys to devour them, as this takes a time a laser shot coming back, and luck, will free you; the second, the generation B are blue pillars of which if you do not take care of will quickly jump over you; the generation C are well hidden and dangerous; and the generation D awaits you somewhere in the building.

Apart from this there are other dangers in your way. Grenade launching towers, electric tiles, laser and mines had been activated as security measures. But they do not recognize allies or enemies, many have been trapped and you are the only one who can rescue them, in exchange of some information and help, and also a live per rescued person.

D/Generation is an amazing and engrossing isometric action-adventure-puzzle game published by Mindscape in 1991.

The year is 2021 and you arrive to the headquarters of Genoq technologies to deliver a package to one of their researchers. You arrive in your jetpack at the top of the building where you quickly find out that something went terribly wrong. The story of what has happened is pieced together bit by but through the various computer terminals and NPC integration. This works to the advantage of the game. If you are interested in the story you can focus on the gameplay, if you want everything in balance you can be more attentive to the bits of information that you discover.

It's an ingenious and innovative game that can offer hours of entertainment and frustration. You move using the numeric pads, on all nine directions (NW,N,NE,W,E,SW,S,SE) and it's essential to the game as there are a lot of enemies (lasers, bouncing homing balls, firing turrets, ….) out to get you and you'll need your wits and flexibility to manoeuvre by them and destroy them using a variety of weapons. Your main weapon, a laser, can bounce off most walls and can be used both to destroy enemies and press buttons that open doors and disable turrets. This gives rise to a lot of interesting puzzles which are not often found in other similar games. The effective use of all your abilities could mean success or doom but it's a memorable journey. Overall D/Generation is an amazing game that stands the test of time and has a certain charm that is resurfacing in recent indie game releases.

The game doesn't have any menu to save, load, pause, restart, exit and instead relies on shortcut keys to do so. These were standard dos games of the time but are not used so much these days. Make sure to keep that in mind when you start playing. The same thing happened to me when I was playing the original Prince of Persia. I had no idea you could save and load so every time I played it I started from the beginning, which is in itself a wonderful and frustrating experience but that is not how the game was designed.

Moebius (2016-03-03):
Quote:
The game doesn't have any menu to save, load, pause, restart, exit and instead relies on shortcut keys to do so. These where standard dos games of the time but are not used so much these days. Make sure to keep that in mind when you start playing. The same thing happened to me when I was playing the original Prince of Persia.

A very common problem indeed, and i certainly covered it in my Prince of Persia review