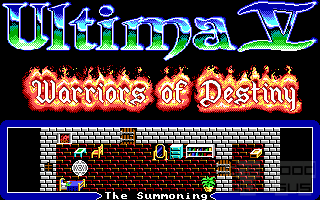 A sudden magical calling brings you back to Britannia, where you find that the king has disappeared and lord Blackthorn, backed by the three mysterious shadowlords, has become tyrant of the kingdom and forced his vision of the eight virtues over of its inhabitants.

Your previous companions are now hidden to escape from the oppression, and in the kingdom not everybody thinks badly of the new king, so you will have to travel around Britannia those that will help you and clues to fight against the oppression. This still means as much freedom, exploration and talking as in the previous game, luckily the conversations are improved and now the characters recognize more than one word for the same question.

Many more things has been improved, as you may now push objects, which mainly serves for activating things in dungeons; select a main character to do all the actions and even unearth object when searching. Also, there are now more objects, like shields, magical jewellery, potions or scrolls, and also more ways for travelling, such as skiffs for navigating the rivers and different kinds of horses.

The realism and mood also are better, the ships can crash with the shores when going at full sail, the chest contain more things that just gold, the silly equipment restrictions based in the character profession have disappeared, there are more kinds of inhabited places, such as lighthouse and the magic now gets a more mystical feeling, as it works through words of power that should be used to mix and cast the spells of the eight circles of magic.

One of the more noticeable changes are the now detailed graphics, the dungeons have different looks, the character are nor made of sticks and the houses are not empty cubes, now mirrors, containers, bookshelves and more things decorate the place, and also tempt you more than before to steal.

But it is not easy to be tempted by goods, as the game is not too hard, even thought you can now only have a party of six members there are not the hordes of the previous one, and the dungeons wont be a big problem, as the rooms that get cleaned will stay forever empty, easing the voyage to its depths, in search of the recently discovered underworld.

This, a true subterranean world, is an important part of the game and a labyrinth. It is as big as the main map, but it is made of several caverns, filled with rivers, lakes and the most dangerous monsters, along with some of the most important objects.

As in the previous, it all ends in a nice game with a philosophical background that never becomes complex but stays out of the silly evil and good division. It keeps also some important links to Quest of the Avatar, and as you can transfer your character it may be a good idea to finish it before playing this one. Also, the manual, as happens in all the members of this series, stores some very important information, albeit not all of it is vital.