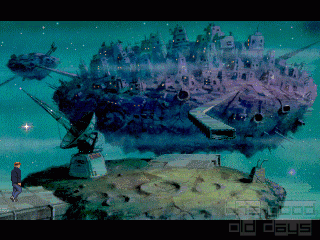 As so often, bribing / threatening (or whatever they did) magazines into giving the disastrous Curse of Enchantia good reviews worked. Sales were apparantely good enough to warrant a sequel. And so, Universe was made. Another monster let loose on humanity or did they get it right this time?

Story-wise, not much has changed. A computer geek called Boris Verne (not-so-subtle allusion) is teleported into some kind of anti-matter universe by one of his uncle's inventions. There, he has to overthrow an evil dictator. Just like in the prequel, nothing is really going on which matters. It's all just an excuse for loosely connected scenes.

The controls are also the same. Lots of menus and submenus with lots of verbs which isn't a bad thing per se. However, in worst text adventure tradition, Universe forces the player always to pick the exact combination of command and items in spite of other alternatives making perfect sense. Sometimes, it's even the most far fetched option which leads to success. An example from the very beginning: In order to climb into a ventilation shaft, you don't have to 'insert' yourself or 'jump' into it, but 'push/pull' your way down.

To make matters worse, items which can be picked up, used or have any other significance are very often tiny and blur with the rest of the background in an undistinguished way. Since the cursor doesn't alert the player when it touches anything important, it's very easy to miss objects.

Then again, without these barriers, the game would be way too small, because there's very little to do. Most locations only harbour one or two puzzles and then it's time to move on. If those made any sense, the game would be over in no time. They don't, but the game will be over pretty quickly anyway because of the horrible death scenes. Oops, the protagonist just fell into the void of space trying to hop onto a drifting asteroid! Damn, that door was secured by laser guns who shoot everybody getting near it! Oh, the evil robot drones have captured you and you've been sent to a prison planet - and the game tells you that 'you realise there is no escape from this penal colony'...

It's hardly worth going on with this review, so here's the unavoidable paragraph about the game's technical side. It's the first OCS game which displays up to 256 colours on the screen at the same time. So they hacked away with the graphics chips to create a custom screenmode. Big deal - what's the point of good graphics (which are good, but don't blow you away; Beneath A Steel Sky looks more attractive with less colours for example) if there isn't a decent game to accompany them? The music is nothing to write home about and there are no sound effects at all.

Conclusion: Slightly superior sequel. At least they put in some text this time and left out 'scrolling' completely. Most of the time, you're just walking around through empty and boring settings doing nothing, though. The location descriptions are actually the only thing worth a good laugh: 'If there are any inhabitants, they're obviously hiding from you', the game tells you while a robed figure is just floating past you. This sums the inherent silliness up very well. Save your time, you'll just be bored.

Mr Creosote:
Hm, maybe I should give it another try? Fourteen years ago, I didn't seem overly impressed.
Markegiani:
One of the best P&C adventure on Amiga! Fantastic story with diverse situations and creative scenery. The only flaw of the game is not so friendly interface (commands).
Mr Creosote:
Feel free to share anything about Universe (1994) here!
[Reply] 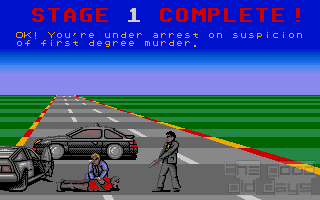