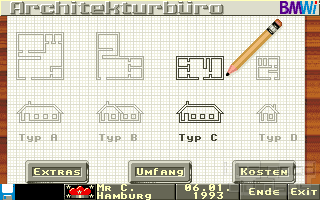 Just a little more than ten years ago (in 1993), there was no 'Internet' of today's proportions. Computer magazines coming with CDs full of stuff were still uncommon, too. To be exact, the first 'one-shot issues' of this kind appeared in early 1994 in Germany. So, 1993 was still a year of game demos being spread on floppy disks, and those were available on quite a few magazine covers.

Most game demos aren't that interesting on the long run, of course. One particular highlight I got this way in that year was one modified level of Chaos Engine. Couldn't have been more convincing! After that on the quality scale, there's a huge empty gap. And then, far, far away, there were a few nice 'full' promotional games. A decent alternative to the often stupid demos. One of these games was Energie-Manager.

The game was developed by Rauser, a company which was very well known for various promotional games at that time. Topic-wise, this one goes into the same direction as Rauser's earlier Das Erbe: The ministry of economics is trying to promote awareness for environmental issues in economy subjects. The player has to establish a restaurant chain and make money while keeping the environment as clean as possible.

It all begins with building your first restaurant. A few important decisions have to be made, e.g. whether you want solar collectors on the roof or not. Once the building is ready, what kind of equipment will you buy? The FCKW-spouting luxury freezer or the economy model? All these are fairly obvious decisions if you just follow the textual descriptions of the options.

The incentive to make such 'good' choices is that each year, awards for the most ecologically advanced restaurant are given out by every city. These awards not only provide a nice amount of money, but it is the game's ultimate goal to collect 20 of them. Earning lots of money is only an indirect, secondary goal.

The last paragraph should make it obvious how far the game's realism goes. Not only does ecological acting pay off in the game when it comes to government officials, the customers also seem to give a damn. As if the ecological standard of a restaurant had ever tipped the decision of any customer where to go!

A game doesn't have to be based on reality to be good, though. Energie Manager does include a few nice ideas, like the ability to choose the type of restaurant you want to run (fast food, Asian,...), there are different sizes of restaurants and even every applicant for your staff has an individual profile with quality and reliability ratings. Not bad at all.

Unfortunately, almost none of these 'seeds' are used properly. Although there might be a tiny bit of influence on the amount of customers if you hire good staff instead of a bunch of losers for example, it doesn't matter much, because your profit immediately reaches regions in which even doubling it won't matter anymore, because you can hardly spend it all anyway. There is even a stock market to trade options of your and your competitor's companies. However, before this could get interesting, the game will be over anyway, because with new restaurants popping up all the time, reaching the required 20 ecology awards is a piece of cake.

There are even more examples like that, but you should get the picture already. There's lots of wasted potential in this game. Good groundwork, but hardly any of this is actually useful, because as so often with promotional games, difficulty is virtually non-existent. Nice try, but only for fans. 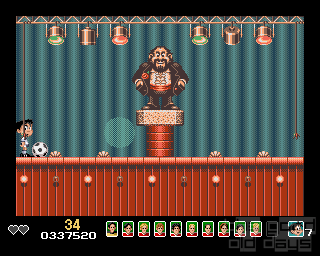