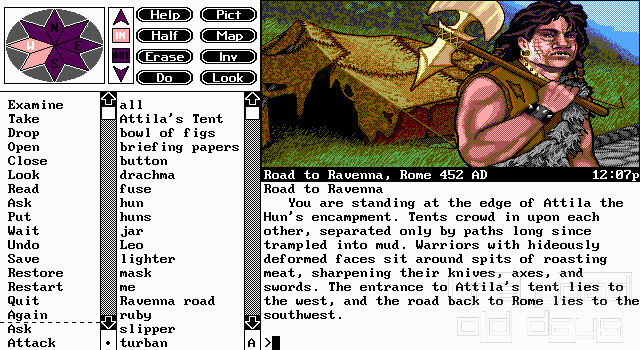 Time certainly flies by... when I first started this site in the last millenium, Legend's Adventure games were pretty common on sites like this one. Not as common as the ones by Sierra, of course, but they could easily be found. These days (2006), you'll probably find a few of the later point & click style ones (Death Gate, Shannara,...) and if you're very persistent, you might stumble across the odd site which mentions the Spellcasting games. I blame this lack on the lack of actual collectors among the webmasters. If the only source you have for games to put on your own site are other websites, it's an automatic downward spiral concerning diversity.

So what is it people these days are missing? For instance, there's Timequest, an excellent time-travelling thriller. In the near future, the secret of time travel has not only been discovered, but put to an institutional use: The so-called Temporal Corps has been established to learn about future negative events in order to take measures to prevent them from happening.

Jumping into the past on the other hand is strictly forbidden. You've all seen Back to the Future, so the reason should be obvious: Any changes to the past can have disastrous results on the present (like when old Biff gives the sports almanach to his younger self...). Now, rogue Time Corps Lieutenant Zeke S. Vettenmyer has done exactly that: He has altered ten historical events in order to destroy civilization as we know it.

The player takes over the role of a new Time Corps recruit who is sent back to fix the timestream. This is still possible, because just like in Back to the Future (and unlike in Bill & Ted), changes in the past don't affect the present immediately (Marty didn't fade out of existence immediately at the dance, but he had the chance to save himself by playing the guitar himself...).

Vettenmyer obvious likes to mess with the big ones. Everything he did supposedly will have major effects on history. For example, he managed to change Aztec mythology in a way which will empower them to repel European invaders instead of being wiped out by Cortez and his few men and he's plotted an early assassination attempt on Caesar. Of course it isn't possible to undo what he's done exactly, but your job is to find alternate means to spoil his plans. That means you have to alter history in a way which has the same outcome as the original version.

Timequest is a very non-linear game. The player can access all six locations in nine different times immediately, and the ten subquests (fixing the events) can be done in any order. At least in theory, because in some cases, they're intertwined. All this jumping between historical periods and locations results in challenging and very imaginative puzzles about manipulating the timestream. Go into the past, change something and all following periods will be visibly different.

However, in spite of your time machine, your time isn't endless. For some reason, you can only jump to the exact timespot when you last left this location, so if you fool around too much, you can't just hop into your Interkron and jump back again. This makes it possible to lose the game, because if you don't manage to fix things in time, Vettenmyer's plan of events will unfold, destroying your present and thus making your time machine useless.

The game uses high-resolution EGA graphics which means there aren't that many colours, but the result is still quite appealing. Interestingly, for every location, differently styled graphics have been used, giving a distinct feeling to every place and the culture it represents. The resolution is efficiently used to provide screen space for commands, inventory and textual description of the setting.

Talking about the texts, they're written in best tradition of the classics which came before. Although this is a serious Adventure game (in spite of my references to popular comedy movies), you can of course trigger funny responses by entering nonsensical commands. The fact that this seemingly inconsistent style works is more than the necessary proof of quality.

What finally lifts Timequest above even Legend's own other games is the combination of consistently great puzzles (which many of their games have) with this strong writing. Non-linear storytelling has never been an easy task, and it shows in many classic Adventure games: too episodic, too many useless McGuffins. Timequest actually manages to tell a consistent story which ends in a classic time-twisting note. Amazing!

The documents have been taken from Home of the Underdogs. Thanks a lot for scanning them! 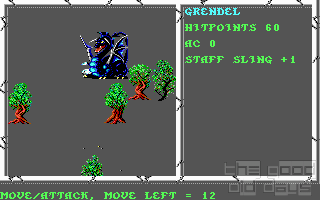