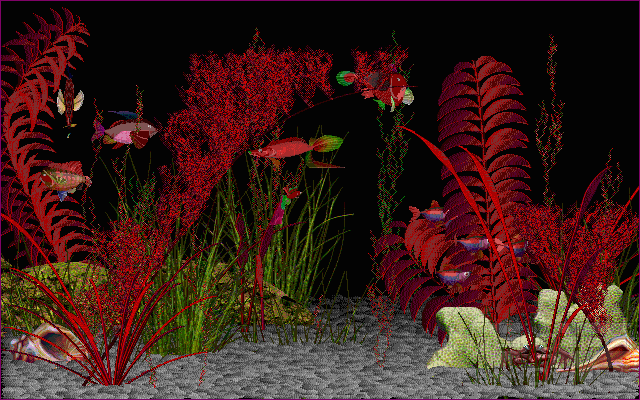 El-Fish is a fish breeding/creating and aquarium-building simulation that was released by the companies Maxis and AnimaTek in 1994 (Maxis is the creator of the successful Sim game series, while AnimaTek was a Russian company that invented the concept of El-Fish). The game was advanced for its time – the photorealistic 3-D fish you can create look and move very realistically, and, through breeding, can be shaped into from 800 possible attributes into infinite numbers of unique fish. A fractal-based generator can also create unique decorative plants for your tank, and a rather intelligent random music generator can put together simple pieces of background music for your tank-display. Plus, just watching the fish you've made swimming in a tank you've designed is a very calming and rewarding experience.

Although some folks' seem puzzled by the point of the game (making fishtanks doesn't sound all that engrossing) from a genetic point of view, the fish breeding part is the real meat of the game. At the outset, all you get is a few average-looking starter fish, and a 'Pond' where randomly generated 'wild fish' can be caught. Overall, dull colored and unremarkable-looking. However, there are almost literally a thousand varieties of colors, fins, shapes, and pattern combinations locked inside those humble looking beginnings. Through selective breeding and forced evolution, certain traits can be singled out and encouraged, rare colors and fin types can be developed, and you can even try and re-create real life fish breeds through the game. After playing El-Fish, I began to understand some of the enthusiasm with which real-life animal breeders shape their animals through sucessive generations. Of course, in El-Fish it's much easier!

Once you've bred some fish you like, you can then fully render them in 3D, so that they can be placed into your tanks. This was the most processor-intensive part of the game, it took anywhere from a few minutes to hours on an 'average' computer of the day. When finished, the fish will swim in front of and behind various tank objects, moving around in 3D space and reacting to things such as fish food and certain animated tank decorations.

Another nice touch is the ability to trade your fish and tank designs with other users. Each fish's genes are stored in .roe files, which are compact and easily shared. You can also make tank objects and import them into the game, as well as your own MIDI and image files as tank decorations. The potential for custom user-made and traded content didn't really catch on, nor did the game, which I think was unfortunate. El-Fish may have catered to a niche audience, but it really had some interesting ideas and tried some innovative things with the whole 'simulation' concept.

Technical stuff: The game can be run in three different resolutions, the highest one being 640x480. This is what the SVGA patch is for. Resolution as well as your name must be chosen on installation. In case you're wondering about the significance of the name: all fish and aquariums created while playing have this name embedded. We're offering pre-installed versions for 640x400 and 640x480. If you want to use another one or have your own name in the game, you have to install it yourself. Download the install disks instead.