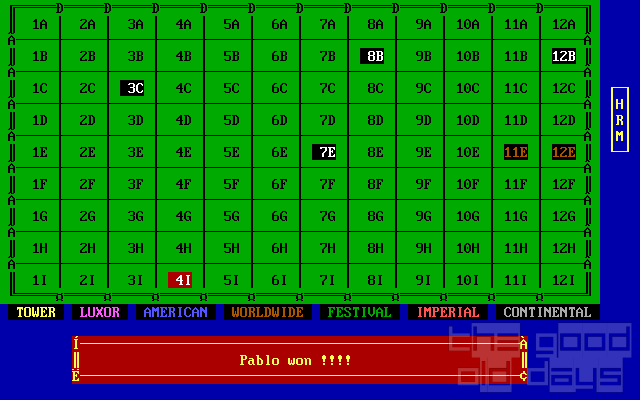 Acquire was one in a series of business board games created by Sid Sackson and released by 3M in the 1960s. Later, most of these games were released by Avalon Hill in the 1970s and 80s and are now the property of Hasbro. Acquire is probably the most exciting of this lot of games. It requires good thinking, great foresight, a little bit of luck and lots of attention. The computer version of the game can last only ten minutes, but these ten minutes will require your full attention. Due to the fact it is a board game, the replay value is extremely high.

In this game, you are building hotel chains. You have a 12x9 grid and six tiles, which can be placed appropriately on the grid. Each player places one tile on the grid each round. As soon as a player creates a row of two filled grids, he or she creates a hotel chain. There are seven different chains, divided into three stock price categories. Whoever creates a chain gets a free share. Each player is then allowed to buy up to three shares of existing hotel chains.

Now the fun begins. As chains grow, the share price increases as well. In addition, chains can merge, or, to keep the correct terminology, the dominant chain acquires the smaller chain. This is the most important aspect of the game. When a company is acquired, the majority shareholder gets a significant bonus, while the largest minority shareholder gets a bonus as well. All shareholders then have three options: sell their shares, exchange them for the shares of the dominant chain or simply keep them in the hopes that the same chain will be created elsewhere. Once the chains are of a certain size, they cannot be acquired anymore. When all players run out of tiles, the dominant shareholders of each hotel get bonuses. The player with the most money wins.

In this game, it is very important to become the dominant shareholder in the right companies. This means buying cheap and holding on to the stock. The player usually keeps tiles that would enhance a company until he or she achieved dominance there. A player that holds a merging piece would do the same. However, a lot depends on luck, as there are five other players who place their tiles. While this game contains some business lingo, it is not a business simulation per se; it is an exciting board game.

This version of the game actually offers mouse support, but you would need DOS mouse drivers. Still, the interface is fairly simple, and you'll get used to it quickly. The game is mainly text-based, with a menu where you can chose you options from after filling a tile. The A.I. is fairly good, but I have not seen the computer selling stock in order to increase their cash. On the downside, you can't opt for fewer than six players. In addition, the colors are far from beautiful.

This Acquire version has by far the best interface of all PC versions of the game (I still fondly remember my Macintosh version). Written in QBasic, the game simultaneously shows the available shares, your holdings, what the computer players are doing and a simple number-based interface. It is really joy to use this interface, but the few downsides devalue the game a little. First, the A.I. acts a little too randomly for my taste. Second, there is considerable delay between moves, forcing you to push buttons a lot to move on. Third, the game's ending seems to be unfinished, as it exits to DOS immediately after showing the scores, without being prompted.

This is quite an interesting version of the game. Interesting in the sense that it's got one of the most difficult interfaces I've seen in the game. The screen is dominated by the board, with only two rows of text on the bottom. This means that you have to scroll through that text to view the playing pieces you own and your holdings. You also have to type in the number of the piece you want to place, which requires a fair amount of attention and a good memory. On the other hand, the A.I. is pretty good, and in few instances I've even seen it saving money when there's no chance to achieve dominance in a certain company.

NetDanzr:
Feel free to share anything about Acquire (1991) here!
[Reply] 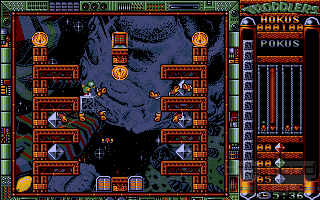