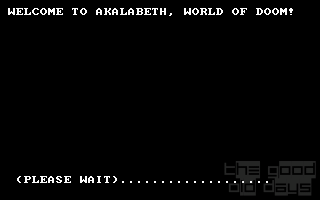 Even after the evil has been vanquished, there are still many foul creatures plaguing the land. It is your task to get rid of them. This rather unusual premise is the basis for the first roleplaying game ever. Selling only eight copies, it wasn't a commercial success either, but is spawned one of the most successful computer RPG franchises ever.

Akalabeth was written by Richard Garriot in 1979 for Apple II in Basic. The game featured character statistics, an inventory system, overhead view and a first-person exploratory mode, at a time when everybody else was just reading what they saw around. While the game never sold well, it has been the direct precursor of the Ultima series. In fact, Garriot used the dungeon routine in Ultima I, to a much greater success.

The game starts when you select your lucky number. This number than calculates the world and dungeon seed. Thus, if you find a game too difficult (even though there are ten difficulty levels), you can always try a different number to get a different layout. After rolling (and re-rolling as much as you want) your character stats and selecting your character class (mage or warrior), you will be free to roam the world. The world itself is very small, spanning only 19 by 19 squares. On the surface, there are a few towns that provide you with food and other items and entrances to dungeons. All in all, the game uses a mere four icons on the surface - towns, dungeons, mountains and you.

Once in a dungeon, the game changes to a first-person view. You will be able to explore the bottomless labyrinths, fighting progressively stronger monsters. Even here, all graphics are very simplistic, line-based, but no worse than those in latter games, such as the first several Wizardry titles. Over the course of your adventuring, you will run into monsters, chests, secret doors and more. Monsters can ambush you, some use magic, and other steal your items.

Where the game really breaks down is the interface, though. Considering the age of the game, I can tolerate the graphics and lack of sound, but the interface has driven me crazy. First of all, you will always need food to survive. On the surface, you will eat one food per turn, while underground, only 0.1 per turn. Still, the moment you run out of food, you drop dead. The fact that some monsters like to steal your food doesn't help, either, and only increases the frustration level of the game.

There are a few minor problems as well. First of all, your character has no peripheral vision, so even if he gets attacked from a side, you have no way of knowing where the monster is located, and it may take you up to three turns to face it. Second, the game is unforgiving when you make a typo. Unlike other games, where the game waits until you write something that it's in its dictionary, Akalabeth will consider anything you write as an action. Especially when you are stronger and face a weak, but nasty opponent, the loss of a combat round can be very frustrating.

All in all, Akalabeth is a very unique game. Not only it is the first computer RPG, which set standards for so many others, but also it comes with a very interesting premise. Instead of the usual “save the world” scenarios, the world has been already saved in this game, and you are only there to do the mop-up job. Origin has released a PC conversion of the game in 1997 in its Ultima Collection, but you may want to check out the Akalabeth Remake home page for a much better Akalabeth version. While selling only eight copies, the game has deservedly achieved a cult status and a cult following.

Akalabeth: World of Doom is a very early computer RPG. In fact, when Richard Garriot finished the game, he sold it in ziploc bags at the computer store where he was working at the time, encouraged by his boss. That was 1979, but the next year it saw a commercial release by California Pacific Computer Co. for the Apple II platform.

Gameplay wise, it's a dungeon crawler in a fantasy setting. You play an adventurer making quests and visiting towns, and eventually entering dungeons where most of the gameplay happens. The game has very crude, black and white graphics, and no sound at all, but shows first person perspective when exploring the dungeons, the wireframe variety. The author decided that dungeon exploration would be in 3D after seeing another game doing the same, Escape (also for Apple II).

The interface is also very crude, based on using the initials of the available commands, e.g. E for “enter” when over a dungeon entrance, or F for “food” to buy it when on a market.

The game was a success among gamers, providing a different kind of experience that the predominant interactive fiction of the time didn't bring. It spawned the very important Ultima series, and in fact it was added in the Ultima Collection as Ultima 0: Akalabeth. It had music added and a few graphical changes, although not at the gameplay. Note that this appearance marks also the first DOS version of this game; previously it was only available for the Apple II.

There is at least one remake made, although the site has disappeared and I can't locate a mirror right now. Besides the usual game database places to search for info about this game (I recommend MobyGames' entry for Akalabeth), there's a nice review at The CRPG Addict.

The game is free to acquire at GOG.com, and it includes both the 1998 enhanced version and a BASIC compiled version of the 1980 original. It has also been released for iPhone on 2010.

The Internet Archive has an online version of the original Apple II release, ready to play or download.

However, the game doesn't play that well today. The interface is very cumbersome except for the most hardcore retrogamers. While it has great historical importance in the cRPG genre as a seminal work, it's certainly not an experience to be enjoyed by everyone, but only a select group. Nonetheless, it's an important game that maybe should be tried, for the shake of it. But having tried to find the appeal on it recently, I can only give this low score of 2. Your experience will vary, so as I just said, try it.

Akalabeth is an early commercial RPG by Richard Garriott. This is in fact version 28B which was the first version Garriott did with graphics on the Apple II.

The official PC version came out as an extra in the Ultima Collection CD.

The graphics of this game are vector based, giving during dungeons a 3D feel. This kind of view was also used on the Wizardry games. However it also uses a top-down view of the worldmap using vector tiles.

The story of the game is quite simple, since the main objective is simply killing monsters in order to being knighted by Lord British. The manual goes into a little more detail explaining the conflict between British a Mondain, and how they battled in the past. That's how British became Lord British, ruler of Akalabeth.

This game acts as a prequel for the Ultima series and even the dungeon algorithm is used for that game.

Gameplay is also very simple, you are just using one main character, with only Fighter and Mage as classes. Each class has different advantages over the other one. The Fighter can use Rapiers and Bows, but has no control over Magic, selecting a spell randomly when using the Magic Amulet, while the Mage can cast the 4 spells available freely.

After wandering along the worldmap, and finding the Castle of Lord British, you will receive your first quest. This quest are fairly simple, you just have to kill the designated creature in the dungeons. There are a total of 10 different creatures in the dungeons, and depending on the Wisdom stat, you will receive a quest for one of those monsters. The less the Wisdom stat you have, the easier the monster would be.

This goes on, until you finally fight the strongest foe in the game, the Balrog. You have access to the ending at that point, but the game is kind enough to let you play as much as you want afterwards.

As a personal opinion, this is a very simple and short game, and that's precisely its appeal. I have played this game several times. It's just a very simple dungeon crawl that generates random dungeons each time you select a different lucky number during the character creation (the random seed to create the map and dungeons).

NetDanzr:
Feel free to share anything about Akalabeth (1980) here!
[Reply] 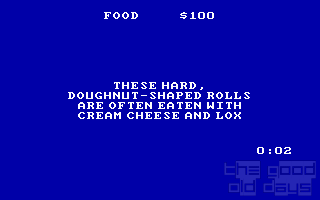