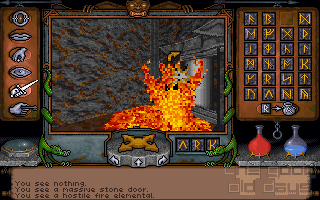 If you’ve ever read any of the PC gaming magazines back in the mid-90’s you would undeniably have seen an advertisement for Ultima Underworld: The Stygian Abyss. It was in numerous magazines and most of the time a full-spread on the back cover. Along with numerous screenshots on the page, it was marketed as “the first continuous-movement, 3D-dungeon, action fantasy!”. If you were an Ultima fan in the early 90’s, you played this game. Most of my friends that read CGW (Computer Gaming World magazine) and saw the first advertisement for Ultima Underworld drooled over the graphics and couldn’t wait to get a copy of the game in their hands.

So, after 20 years I finally played Ultima Underworld again. It’s been a long time since I’ve actually sweated with a nervous twitch through each step of darkness of the Stygian Abyss. Sorry Skyrim, I’m putting you on hold. I’m going back to my roots!

The game starts out with an animated sequence with some awesomely poor voice acting. This was back in the day when digitized voice was an absolute treat, so even goofy-sounding digitized voice brought in awes and a tingle all over. A creature kidnaps a princess from her room in the cover of darkness. As the screaming brings guards, they find you in the room and accuse you of kidnapping the girl! Oh the tragedy! You’re brought before the baron and sentenced to spend your days in the Stygian Abyss trying to rescue Arial, the princess that was kidnapped. You’re only given some rags to wear and a few provisions to help stave off an early demise when you’re first locked behind a massive door with your only way is forward into darkness, ever downwards into the deep Stygian Abyss. I won’t get into the story or the characters as I feel you’ll need to play the game in order to make sense and I don’t want to give anything away.

Ultima Underworld allows you to visualize this awesome dungeon crawl in a 3D world. The game is full of animated sprites of fellow humans, monsters and treasures. The menu system and interface are well-designed and intuitive The sprites for creatures and objects are detailed and colorful. Happening upon a giant spider actually did make me jump and gave me the heebee-geebees to the point I brushed my neck to make sure there wasn’t one touching me. For this early of a DOS game that did 3D, this did it very well. Its fully 3D as well, since you can have full 3D-movement within the game, unlike DOOM or Wolfenstein 3D where it was extremely-clever 2D ray casting where it only seems like 3D. You can look up and down, have layers within the level, go under or over a creature. For its time, Underworld was amazingly detailed and still works well today.

In order to survive the massive dungeon you’ll have to scavenge together weapons, armor, food and many other items. Even the essential torches are sometimes hard to come by. You truly feel the struggle of being in a dungeon, fighting for survival by hiding, running, combating numerous opponents and even trading and bartering for items of necessity. You can tell that you’re immersed when you get so excited by finding your first sword that isn’t rusted-through and eating your first meal that wasn't classified in-game as putrid. What really shocked me was that after the first 10 minutes of adjusting myself to the awkward control scheme and low-res VGA graphics, I was hooked again!

There are numerous side-stories to accomplish even on the first level, and hundreds more as you explore each lower level. Each new level down contains new and tougher opponents, with many of them very difficult to overcome when coming across for the first time. You’ll be carefully stepping through darkness as any new creature maybe the one you’re not prepared to fight.

Interaction with non-hostile characters is quite rewarding. You can talk to many different people and odd creatures. This is where bartering and trade happens, and where you’ll need to read carefully the story that unfolds for hints and clues on how to solve puzzles and gain trust from those who inhabit the abyss. The conversation window gives you the ability to choose how to respond and interact, but be careful telling a grey goblin that his sister looks like a slimy slug or you might end up fleeing for your life from a hoard of angry goblins. I did!

One of the best things about the game is the included automap feature. This was an amazing feature at the time that auto-mapped your environment as if you were hand-drawing your explorations! It is blank when you look at your map at the first level, but when you start to explore it will draw out the layout of the current level. You can even take a virtual pen and type out notes of interesting places or warnings. It absolutely helps drawing you into the game (no pun intended), helping with your imagination that you are alone and surviving to the best of your abilities. While playing Underworld I would frequently look at the notes, even ones on previous levels, to help solve quests and find items.

Like most modern role playing games, you can grow your stats by using them again and again and leveling up. For instance, you can repair items if you have a skill set needed to successfully repair that item and the resources to do so. Being able to repair your sword and armor is a nice skill to have as there are plenty of doors to break through if you lost the key. There are a variety of interesting and very needful survival skills such as fishing, bartering and sneaking. Skills aren’t the only thing that helps your character battle through the abyss; you also have magic to help out. I didn’t play around much with magic other than create food, create light, heal and some projectile magic but I’ll play through this again with a heavy emphasis on the magic system to see how it compares to wielding a deadly axe.

Ultima Underworld designed inventory management well enough, as you have your main backpack and inventory slots, as well as further sacks to organize your belongings. You’ll want to collect almost every single thing to try to barter or trade it away, and having it organized is a necessity. You can carry everything though, so I usually made a cache of items and noted it on the auto-map, so if I needed more money or a specific item I could go back to my cache.

The controls for the game are awkward at first and take some practice. You use a mouse to control how you go forward, but you have to hover the cursor the main screen. To go faster you click and hold and move the cursor up. To turn you click and hold and move the cursor to the left. There are no WASD commands for movement. You can look up and down to look around your surroundings, and before you make that leap of faith into a dark crevasse. There are some places where you do need to jump, and even run and then jump to make it to the other side.

Ultima Underworld exudes refinement. Sure, there are a few things they could have done better, but it being the first fully-3D dungeon crawl at the time, it does most things well and is very entertaining. This was the first time a true 3D-immersive dungeon-crawl was to be experienced. It really was a paradigm shift on how we experience role-playing games, and when I use the word paradigm in a sentence without air quotes and a smirk, you know I mean it.

If you want to adventure through a dark dungeon, fighting for survival, try out Ultima Underworld, one of the best DOS Action-RPG games ever. You'll enjoy it immensely. After over 20 years this game rekindled that same excitement that I experienced in my teenage years and even made me look for spiders under my desk.

Many years after his last adventure in Britannia the Avatar is brought back by a mysterious apparition, and he appear at a bad place and moment. Thanks to it he ends accused of a kidnap and sent down to the Stygian abyss, from where it is not possible to escape.

For this spin-off the gameplay has received many changes that make it a different game compared to the other of the series, making it more action oriented sometimes but also giving you more control over your surroundings.

First the two most noticeable, you are alone, on your own, with its good and bad things. And the game is in a first person sight, which gives the typical problems of little visibility, mainly thanks to rarely having a good source of light; and manoeuvrability, rotating and jumping can be painful.

Another also noticeable change is the magic system, which this time is based in runes, each being the representation of a word of power. You only need two or three of them and mana. This system based just in itself allows having some hidden spells, and even thought it may look otherwise, is not unbalanced compared to the reagents system.

And this is mainly because the skill system, the last and probably the most important change. Now when gaining a level you may meditate at an ankh, using the proper mantra, and improve at a range of skills that go from fighting, defending or using a kind of weapon to casting spells, mana capacity, identifying, spotting hidden things or stealth.

Yes, you can be stealthy, through skill or magic. They have took care with the world interaction and there are several interesting things around, that include using tools, like a rock hammer to break boulders; or making some simple ones, such as a fishing pole. And the design of the game may give you more than one way to achieve your goals, when facing a door, for example, you may pick it, open it with magic or bash it, taking the chance of breaking your weapon. The characters are also, as usual, interesting, and the quests they give rarely consist on simply killing something. Well, they tend to consist in a thing, in exploration.

The game is something to be played, even today there are few three-dimensional games that give so much freedom and are well done. It haves what the Ultima are known for, many little details that create an interesting and fun world.