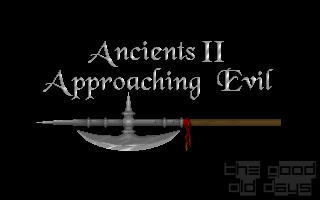 It is very unusual for a relatively unsuccessful game like Ancients I to have a sequel. Ancients II: Approaching Evil simply increases the scope of the original game, but offers little else.

Ancients II is a shareware first-person roleplaying game, where you take charge of a group of adventurers and travel the land, vanquishing the monsters. As is the case with the first part, I could not find a coherent story or the ultimate goal in this game. It is as if the designers were creating only a demo for a game engine and forgot to fill in a story. Or maybe the engine did not allow a quest system. Either way, the lack of the story makes the game very repetitive and boring.

As in the first game, you start out in a town with the usual amenities - a temple, an inn, a few shops and a casino. The graphics are largely the same - a mixture of the Bard's Tale screen layout and Might and Magic I-like environment. As in the previous game, monsters simply pop up in front of you, and their graphics (as well as the graphics of your characters) are funny in their ugliness.

The only major improvement in the game is the ability to venture outside of the town. That is not as easy as it sounds, though, as there are no town gates, and the only exit is hidden among one of the many uniform doors lining the streets. As it was the case with Might and Magic I, towns take up only one square on the outside, but unlike Might and Magic, the town in Ancients are not located in dead ends. Thus, finding your way back is much harder than in Might and Magic, as you can walk a square away from the town and never notice.

Ancients II is an all but forgotten game. It never caused a stir when released, and disappeared soon afterwards. As bad as the game was, it is still a shame that not even its designers thought to preserve the memory of the game.