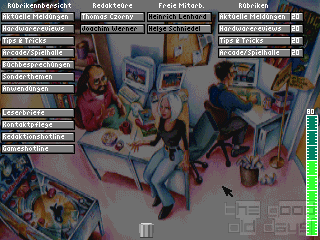 A safe way for a game to become successful back in the 'golden days' was to get good reviews in the magazines dealing with computer games. Most companies went with simple bribery (even though you never believed this of course, eh?).

Mag by Greenwood Entertainment goes another way (additionally?): it simulates the business of the people who had most influence in the target audiences decision whether to buy something or not. And the computer magazine business is not portrayed as dull paperwork for bureaucrats, but the people working there are of course modern Robin Hoods!

The company's motivation may have been that, but it could also be me who is 'slightly' paranoid - conspiracy here, conspiracy there, you know. Let's just assume there was good will involved to analyse this game objectively.

It is the mid-80s and the first crash of the console market has just taken place. The C64 and the CPC are ruling the market. Some of the few exising computer magazines (which deal with hardware and applications) begin to include game reviews. Some of these specials go independent and form the first bunch of (by the yesteryear's standards) successful game magazines.

Being on the forefront of a relatively new market can be exciting and promising, so you decide to become a publisher yourself. Your initial money hardly allows more than one small magazine at first. Many writers are a luxury, so specialisation is a necessity.

What systems do you want to specialize in? That's not so hard to decide. Even though it is in theory possible to make a magazine for PC or Amiga games in 1985, you won't have that much to write about. The C64 sees a lot more publications and is a lot bigger market on the whole.

How expensive should the production be? Should your magazine be printed in colour or only black and white? Do you prefer a poppy layout or a 'serious' one? Where do you want to advertise? What about other categories than game reviews? Apps, hardware, program listings, interviews with developers - your readers could be interested in all that. Which contacts do you want to stress: to the game producers (to hear about latest news first and maybe even to get an exclusive game to review) or to the readers (having a hotline, answering mail)?

As your magazine is slowly coming out of the red, the computer market is changing. More and more is developed for the Atari ST, the Amiga is lurking in the background, too. To be on the vanguard again, a second magazine is due. Managing more than one is impossible though, so one of your 'babies' has to be given to one of your underlings. That doesn't mean you have to trust him or her blindly of course. You're still controlling the finances and you can revoke every decision. It should not be needed though, so you can concentrate on getting your new magazine running.

Typically for German business simulations, Mag is very interesting at first. As soon as you succeed in getting your first magazine to be profitable, there is a sudden drop in motivation. Starting the second one, it rises again a bit because there is something new. Soon, it all becomes routine and quite boring. The 'campaign' (1985-1994, i.e. all the 'golden years' of computer gaming) usually consists of three magazines, so playing it through once is really fun, but at the end, you'll have everything tried out and there won't be anything to discover anymore. Then, even the easy handling and the lack of boring numbers can't save Mag anymore from rotting on the hard drive for some time until you can pick it up again!

Talking about a hard drive, Mag is one of the very first games which requires to be installed to one! No playing from floppies. If the game doesn't run after installation, manually copy the contents of the C drawer within the game's drawer into your Workbench's C drawer and the D-keymap from the game's devs drawer into the Workbench's devs/keymaps drawer. 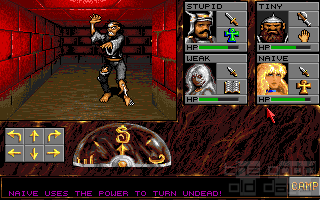