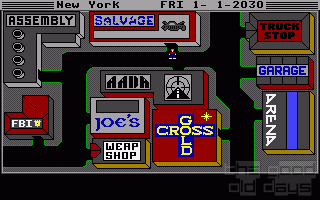 Autoduel is one of the few classic games that don't deserve as much attention as it is getting. It may sound ironic that I review a game just because I don't consider it worth a review, but it isn't so. Autoduel is a very original piece of work, which is seriously flawed by inferior graphics, awkward interface and an extremely steep learning curve. Autoduel is simply the result of applying arcade principles to a pen-and-paper roleplaying game.

The story of Autoduel starts in 1985, when Steve Jackson games published a pen-and-paper RPG called Car Wars. In this game (of which Autoduel is a faithful adaptation), you started out as nobody, in the US of 2030. At this time, anarchy rules the country, and a few city-states emerge. Only these city-states are safe for someone like you. The rules of survival are relatively simple: you get a car, you get a few weapons attached and you fulfill various courier tasks for the AADA (American Autoduel Association) or some of the hit tasks for the FBI. In case you want to build up your prestige and get some money, you can join arena fights. Life is not easy, however, as there are gangs waiting for you right outside the city walls, eager to make mincemeat out of you. While the game is pretty open-ended, and you will have lots of freedom, there is one goal at the end: the capture of Mr. Big, a mysterious outlaw.

The computer version is a mixture of role-playing and arcade. You create your character and distribute fifty points among three statistics - driving skill, marksmanship and mechanic ability. The first two are self-explanatory, the third skill determines how much you will be able to salvage from cars and sell (or use yourself). As you use these skills, they will improve, most notably marksmanship. The other statistics, money and prestige, are earned the hard way - through constant fights.

The game has three modes of play, all of them viewed in a top-down view. The first mode you will encounter is the city view, where you will be able to visit various stores. Not all cities have the same stores; some have only a Truck Stop (more like a hotel), while others have almost everything. The second mode is the arena, where you can fight other cars. Depending on your prestige, you will be able to fight in several categories. The third mode is the outside world, namely the East Coast, where you will have to fight your way between cities to complete your quests.

While all this sounds mighty interesting, the botched production has spoiled the otherwise great game. The first thing you will notice is the low quality of graphics. I am not comparing the graphics with today's standards, even in 1988 these graphics were considered to be the low end. In fact, for the next two years various game magazines have used these graphics as the benchmark for "ugly" (that's how I got to know the game in the first place).

The next thing you notice about the game is an awkward interface. Especially when using your keyboard, you'll soon learn that the left and right arrows don't turn you into that direction; in fact, all arrows will accelerate you into their respective direction. If you want to drive from left to right, you press the right arrow. If you want to make your way from top to bottom, you press the down arrow. And so on? While this is not much of a problem in peaceful times, when circling around cars that try to shoot you down, you are likely to stumble upon the controls and get yourself killed over and over again till you master it.

The third negative thing about the game is an incredibly steep learning curve. The game is true to its paper version, which means lots of secondary statistics that change all the time. For example, you will have to watch all your four wheels (the car gets erratic when you blow one), your own body parts, armor parts and the ammo for up to ten weapons. All this works really well in a paper turn-based game, but in arcade mode this is likely to frustrate you to no end. An inexperienced player will have to concentrate fully on getting the enemy in front of his car to get off a shot while dodging bullets; watching all these additional statistics would make even an intermediate player dizzy. And did I mention that once you die you remain dead? This gets especially frustrating when you played the game for a few days?

The game is unique in one more aspect, even less pleasing than others. This was one of the first games I played that used to crash. Especially when trying to leave the game, it often froze. Even some reviews from that time mentioned it, without ever thinking that a time would come when such problems were considered a part of the game by most players.

Overall, Autoduel is not the moment I want to remember Origin and Richard Garriot for. The game worked well on paper, but porting it to the computer as an arcade game was a mistake. The game is much more frustrating and much less entertaining than the Roadwar series by SSI, and should have been remembered when thinking how not to design computer games. This lesson has been forgotten, but that's a different story?