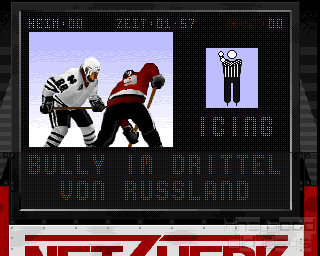 Before certain endlessly running series by a certain publisher on a certain system became common, the popular sports games originated on the Amiga. Just think of Kick Off or Sensible Soccer!
Concerning ice hockey, console titles were admittedly first. Surprisingly enough, a German publisher picked up the idea and made an Amiga game about this sport! Most likely only grudgingly between the 999th and 1000th dry business simulation no buyer was interested in I guess

Before we come to that, something about the 'surroudings' first. You can play in tournament mode where you have to beat all other teams (only national teams included) in a row, otherwise you have to replay the match, much like in certain racing games, or you can have a single match. The team strength can be set to two levels for each opposing team, so one could call it four difficulty levels on the whole. You have full control of the line-up, there are statistics and strengths for each player and so on. In the game, you can change lines fully manually - or you leave all that up to the computer and just jump directly into the game itself.

So there we are at the core of each sports game! If you have played anything of the genre, you'll immediately feel at home: with your joystick, you control the player of your team who is nearest to the puck. A push on the button triggers an action depending on the current situation: when the opponent is in possession, you try to tackle him, if you have the puck and you're skating along, you'll pass it to another of your players, if you're standing with the puck, you'll shoot in the general direction of the goal (the longer you hold the button, the harder you shoot). As soon as you've figured out the difference between shooting and passing, there shouldn't be any problems anymore.

One of the reasons why ice hockey works so good in computer games (as opposed to most other team sports) is that the 'physics' of the game go along perfectly with the abilities of a computer. It is just impossible to make a 180³ turn in full speed! You have to 'drive' in curves and that looks and feels very good on the screen - it saves the animators a lot of work with 'turning', too. Cross Check emulates this very well, the general 'slowliness' of all changes of your speed and direction feels just right.

A general problem of all sports games persists unfortunately: regulated defense is hardly possible because it's all a bit chaotic then and scoring goals is too random. The latter is especially bad in ice hockey games because of the small goal and (in comparison) huge goalkeeper which prevents any kind of real aiming (even though the controls include this option). I really don't know a solution for this, too, so I won't complain too much.

Overall, Cross Check is really a good game for short breaks. What are you waiting for? Grab your joystick and hunt the puck! 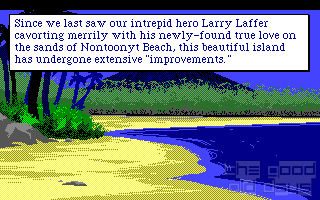