Ishar 3: The Seven Gates of Infinity
for PC (DOS) 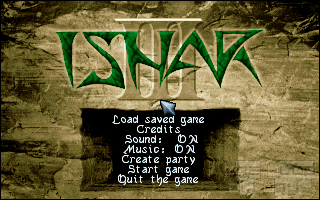 Silmarils could not find a worse time to release Ishar III. 1994 was a year when highly anticipated sequels were battling surprise hits, and Ishar III was neither. On one side you've had games like Ultima VII, which was so massive that Origin split it in several parts, Dungeon Master II, one of the most anticipated RPGs of all times, Might and Magic: World of Xeen, arguably the best M&M game, and Wizardry VI, with a new graphics engine. On the other side, you've had several surprise hits, which became cult games by now: Lands of Lore: Throne of Chaos and System Shock. Somewhere in the middle, there were the underdogs: Ishar III and Realms of Arkania II. Both games were the sequels of rather obscure series, published by rather obscure companies. Silmarils is a French company, which had a moderate success in Europe, but is unknown in the US. Sir-Tech, while well known, based its Realms of Arkania series on the Das Schwarze Auge German role-playing series (editor's note: that series was made by Attic and only published by Sir-Tech in the USA -Mr Creosote). It comes like a surprise that among such an exquisite company, Ishar III is still alive. In fact, it is shining.

Ishar III thrusts you in the role of Zubaran, the same character you played in Ishar II. Arriving in the city of Koren-Bahnir, you meet a strange fellow named Astar who tells you that Shandar, who you decided in the previous game, is not dead yet, and plans to merge his soul with the body of a dragon. Your task is to stop him. To do so, you will be required to perform a series of tasks, which will bring you closer to the final dungeon, where the Black Dragon of Sith awaits. Unlike Ishar II, you will not move between locations, but in time. After a certain task, a new time portal will open, and you will be able to enter it. Some portals will work only during certain times, while others will teleport you to different locations in time, depending on the current time. Others yet will change their final destination after you perform certain tasks.

The story is quite straight-forward, but a little too linear for my taste. Basically, unless you perform a certain task, you will be not allowed to advance. This greatly negates the freedom of movement and exploration that made the previous games so great. In addition, the few times you will be able to jump over prescribed tasks, you'll get stuck in a bug and will have to load an older game. Finally, the hints are far and between, making most of the game a guesswork.

As with previous Ishar games, Silmarils have placed great importance on graphics, but unlike the previous games, the game lacks a little. With the exception of a swamp, all background graphics are recycled from the previous game. In fact, the town graphics look a little worse, lacking the plasticity of Ishar II. Dungeons are really the problem here, however. While the graphics are beautifully drawn, I simply don't think that bright-yellow ornate walls is whet you'd expect from sinister dungeons. Characters, on the other hand, are in a much better shape. Most human-like characters are digitized actors, and most animals (with the exception of spiders) are beautifully drawn. Unfortunately, all characters lack a sufficient number of animation cells. Most of them have three or four poses - the default pose when they are far away, a threatening pose when they are two steps away and a two-cell animation while fighting. I'd much prefer the cartoonish, but fully animated characters in Dungeon Master II.

Interface in this game has improved slightly, making the orientation a little easier. Saving and loading the game has become much simpler, as did the item handling. The only problem I have encountered here is a small, but important bug: whenever a character receives more than one item of the same kind (applies to stackable items only), one item disappears. So if you buy ten pieces of food, for example, the character will have only nine of them. The next time, however, the character won't loose anything anymore. One major improvement in this category, however, is the fact that you can finally sell your old equipment back to the stores. When mentioning the interface, I should also point out that the game allows you to import Ishar I and II parties.

As with previous Ishar games, lots of importance was placed on fights. Here the interface remained the same. However, the opponents' strength seems to increase with your own strength, which allows the game to remain challenging all the way to the end. Later in the game, though, you will gain powerful enough spells to blast your way through any enemies (aided with manna-regenerating potions). Combat become even more challenging when you run into powerful magicians. The only three gripes I have about the combat are that the enemies don't try to outflank you, they have a limit on how far they move, making it easy to outrun them and kill from a distance, and that the final enemy, the dragon, can be killed comfortably from a safe distance.

So how does this game compare with other titles that were on the market at the same time? The gaming world is vastly inferior to that in World of Xeen and Realms of Arkania II. However, it is actually larger than Lands of Lore and Dungeon Master II. The latter, however, was much more advanced graphically, but could not stand a chance to the awesome engine employed in System Shock. Overall, I would place Ishar III a step behind Dungeon Master II, but due to a larger gaming world and better graphics ahead of Lands of Lore. System Shock and World of Xeen would lead the pack. Please note that I have taken into account only first-person role-playing games.

Overall, Ishar III is a game you should definitely try and play. It is large and tough enough to give you at least 20 hours of gameplay if you use a walkthrough and maps. Without them, expect a good week or more of hardcore gaming before finishing it. Ishar III is also one of the games where you want to do that extra step before going to bed; too bad that those extra steps transform into several extra hours. However, don't expect anything groundbreaking; the game was well done, but without the spark of genius that produced the previous two games.